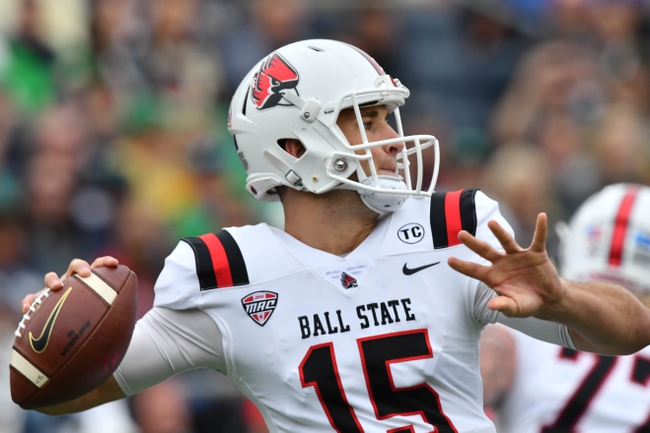 The Western Michigan Broncos will travel to Scheumann Stadium to take on the Ball State Cardinals this Tuesday night in College Football action.

The Western Michigan Broncos lost their 2nd straight game and dropped to 6-4 (4-2 MAC) on the season after being defeated by the Ball State Cardinals, 59-14, this past Thursday. Western Michigan had a ton of issues protecting the football and the Broncos had no chance to fight back after they went into halftime trailing by a 45-0 margin. Western Michigan was outgained by a 420-270 margin and lost the turnover battle by a 6-0 margin. Leading the way for the Broncos was QB Kaleb Eleby who completed 10 of 19 passes for 152 yards, 1 TD, and 2 INT.

The Ball State Cardinals lost their 3rd straight game and dropped to 3-7 (2-4 MAC) on the season after being defeated by the Toledo Rockets on October 31st. In a game that featured 10 total turnovers (5 from each side), the Ball State couldn’t fight back after Toledo took a 28-7 lead with 8:18 left in the 2nd quarter. Ball State was outgained by Toledo by a 531-437 margin. Leading the way for the Cardinals was QB Drew Plitt who completed 29 of 47 passes for 340 yards, 1 TD, and 2 INT.

Both teams have been really hurt by injuries and although Western Michigan has allowed 50+ points in each of their last two games, a lot of that was due to the offense giving opposing teams great field position due to turnovers. The line has yet to be released as both Ball State’s QB (Neal) and RB (Gilbert) are currently questionable however, even if they aren’t able to go, I saw enough out of Drew Plitt that will have me side with the Cardinals. Check back later when the line has been released.

Update (2:49 PM) - It looks as if Riely Neal is out for this game while Justin Gilbert is probable for the Cardinals. As I mentioned above, the Western Michigan defense has been lit up as of late and their offense hasn't been the same since losing QB Jon Wassink for the season. As Drew plitt showed that he can at least move the ball as he had 340 passing yds in his last game agianst Toledo, I think Ball State will be able to do enough at home in this one to cover with the points.