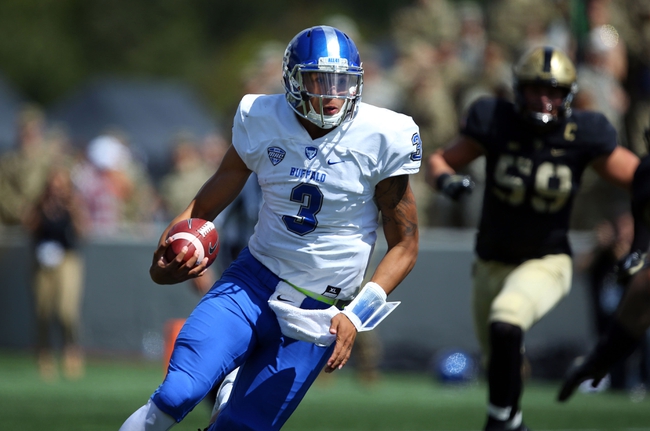 MAC college football action features a week 12 bout between the Buffalo Bulls and the Ohio Bobcats.

The Buffalo Bulls ran their conference record to 6-0 with a 48-14 rout of visiting Kent State in week eleven as a 17 point favorite. Buffalo rolled up a 478-183 yardage edge behind 358 rushing yards.

Jaret Patterson was Buffalo’s top runner with 187 yards and a pair of trips to the end zone on 18 carries with Emmanuel Reed added another 58 yards and a score on nine touches.

Charlie Jones paced the Bulls receiving corps with a pair of receptions for 43 yards while Anthony Johnson caught a three yard TD pass.

The surging Ohio Bobcats saw their four game winning streak end in a 30-28 defeat a Miami (OH) and now trail Buffalo by two games with two to play.  Both squads finished with around 360 yards with Ohio blocking a punt and scoring but also giving up a safety which turned out to be the difference.

Bobcats quarterback Nathan Rourke connected on 16-27 for 163 yards and a pair of touchdowns while rushing 13 times for 16 yards.

AJ Ouellette paced Ohio on the ground with 168 yards on 15 carries while catching three passes for another 29 yards while Maleek Irons scored on a three yard run. Papi White topped Ohio with five caches for 44 yards and a TD with Andrew Meyer caught an 18 yard scoring strike.

am a Bobcats fan but I'm looking at Buffalo while waiting for a total...