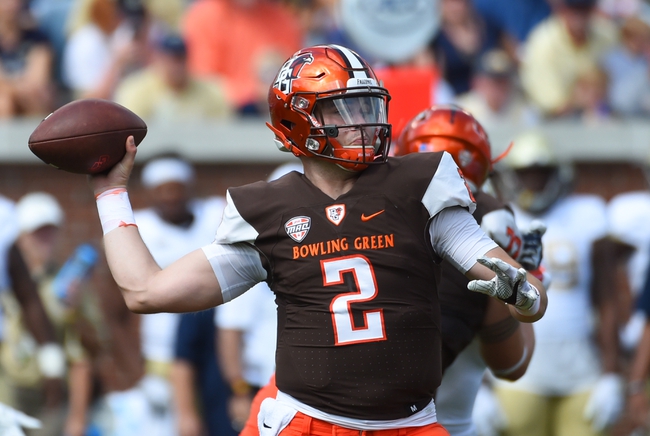 The Bowling Green Falcons snapped a 6-game losing streak and improved to 2-8 (1-5 MAC) on the season after defeating the Central Michigan Chippewas, 24-13, this past Saturday. Bowling Green went into halftime trailing by a 13-0 margin, however, dominated the 2nd half on both ends and took the lead for good after a 2-yd TD reception by Dorian Hendrix gave Bowling Green a 14-13 lead with 10:21 left in the 3rd quarter. Bowling Green outgained Central Michigan by a 320-166 margin and won the turnover battle by a 2-0 margin. Leading the way for the Falcons was RB Andrew Clair who had 82 rushing yds and a TD on 12 carries.

The Akron Zips lost their 2nd straight game and dropped to 4-5 (2-4 MAC) on the season after being defeated by the Eastern Michigan Eagles, 27-7, this past Saturday. Akron’s offense was basically non-existent against the Eastern Michigan defense and the Zips allowed the Eagles to pull away after taking a 17-7 lead with 13:41 left in the 4th quarter. Akron was outgained by Eastern Michigan by a 384-90 margin and lost the turnover battle by a 4-1 margin. Leading the way for the Zips was RB Van Edwards Jr. who had 53 rushing yards on 17 carries.

It’s been a season to forget for Bowling Green as although they have a decent passing attack led by Jarret Doege, their defense has really struggled as it ranks just 128th in scoring defense. Akron is a defensive-minded team however, the Zips could be in real trouble in this one if Kato Nelson can’t go as the Akron offense looked completely lost without him against Eastern Michigan. This game won’t be lined until the status of Nelson is determined, however, if he is not a go, it’s going to be hard for me to roll with Akron even if they are going agianst the poor Bowling Green defense. Check back later when/if this line is released.