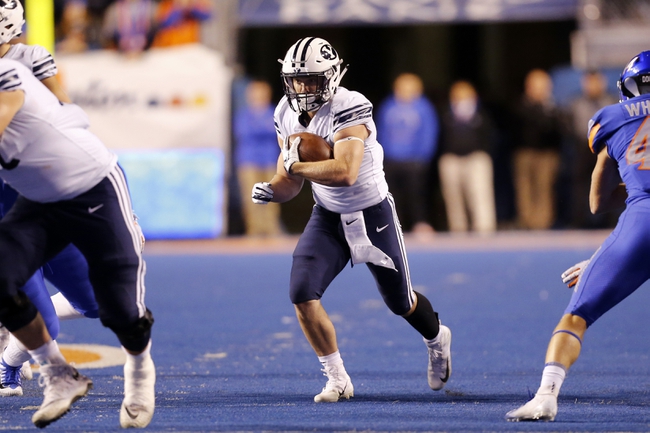 The New Mexico State Aggies and the BYU Cougars will be meeting up at LaVell Edwards Stadium on Saturday in week 12 college football action.

New Mexico State sits at 3-7 on the season so far. The Aggies have fallen to Wyoming, Minnesota, Utah State, New Mexico, Louisiana, GA Southern and Texas State while beating UTEP, Liberty and Alcorn State this year.

In the Alcorn State game, New Mexico State QB Josh Adkins put up 396 yards and four touchdowns, and Christian Gibson led the rush on 89 yards. Tops in receiving for the Aggies was Jason Huntley with 111 yards and a TD from nine catches.

Over on the BYU side, they’re 5-5 this season. The Cougars have fallen to Cal, Washington, Utah State, Northern IL and Boise State but taken out Arizona, Wisconsin, McNeese State, Hawaii and UMass.

In the UMass game, BYU QB Zach Wilson put up 167 yards and two scores, with Matt Hadley leading the rush on 69 yards and one TD. Neil Pau’u put up 62 yards on two catches to lead the Cougars receivers.

If there’s one thing you can say about New Mexico State, it’s that they’ve been scoring pretty well lately. Over their last seven games, they’ve hit 20 points in each one and 25 in six of them. Trouble is, they’re still getting outscored.

As for BYU, they’ve been wildly inconsistent in the scoring department, and could only muster six points versus Northern IL despite allowing just seven. The Cougars did hang 35 on UMass, though.

All things considered, I like New Mexico State a little better here.