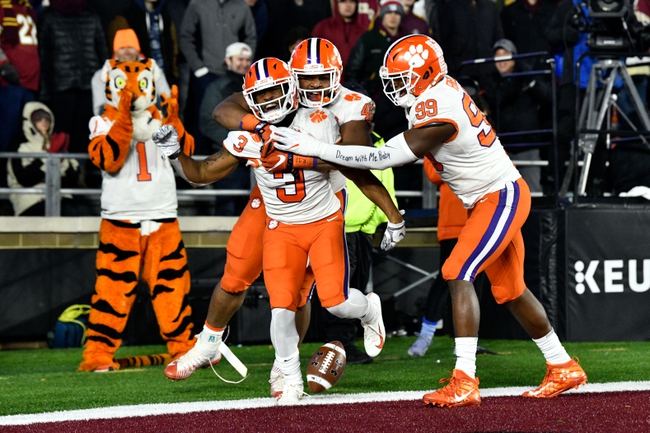 The Duke Blue Devils and the Clemson Tigers meet up at Clemson Memorial Stadium on Saturday in week 12 ACC college football action.

Duke comes into this one at 7-3 overall. The Blue Devils have fallen to Virginia Tech, Virginia and Pitt but otherwise taken out Army, Northwestern, Baylor, NC Central, Georgia Tech, Miami FL and UNC.

In the Tar Heels game, Duke QB Daniel Jones put up 361 yards, three touchdowns and a pick while also leading the rush on 186 yards and a TD from 15 totes. TJ Rahming was the top receiver for the Devils on 98 yards from nine grabs.

In the Eagles game, Clemson QB Trevor Lawrence logged 295 yards with a TD and a pick, and Travis Etienne led the rush on 78 yards. Hunter Renfrow was the top receiver for Clemson on 80 yards from eight catches.

Duke has been sneaky good for most of the year, but they’ve also got a few head-scratching results on the schedule and put up a limp effort here and there.

As for Clemson, we pretty much know what they are, and if all goes as planned they’ll finish out the year without a blemish.

That said, I think the Devils can keep pace here (relatively speaking) so I’ll take them to cover.