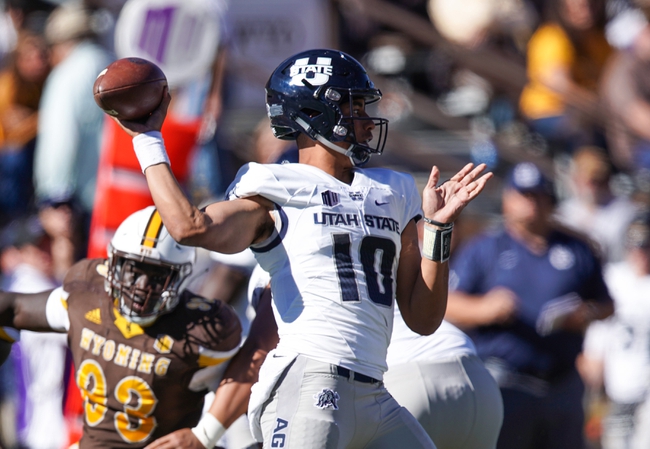 The Utah State Aggies won their 9th straight game and improved to 9-1 (6-0 MW) on the season after defeating the San Jose State Spartans, 62-24, this past Saturday. Utah State continued their offensive dominance in Mountain West play and had no trouble taking care of the Spartans after taking a 38-10 lead at halftime. Utah State outgained San Jose State by an 804-400 margin and won the turnover battle by a 3-0 margin. Leading the way for the Aggies was Jordan Love who completed 32 of 42 passes for 491 yards & 5 TD.

The Colorado State Rams lost their 3rd straight game and dropped to 3-7 (2-4 MW) on the season after being defeated by the Nevada Wolf Pack, 49-10, this past Saturday. Colorado State had no answers on either side of the ball against the Wolf Pack and couldn’t fight back after Nevada went into halftime with a 28-0 lead. Colorado State was outgained by Nevada by a 636-260 margin in the loss. Leading the way for the Rams was QB Collin Hill who completed 23 of 40 passes for 186 yards, 1 TD, and an INT.

Utah State has been absolutely outstanding this season as they come into this game with the top-ranked scoring offense and 31st ranked scoring defense in the country. Colorado State has been able to put some points up on the board with their passing offense this season however, their defense has had real trouble this season and come into this game ranked just 119th in scoring defense. The Rams are currently in rebuilding mode after going with the younger Collin Hill at QB and as I just don’t see the Aggies offense letting up on the gas at all in this one, I’m taking Utah State to cover this large road spread.