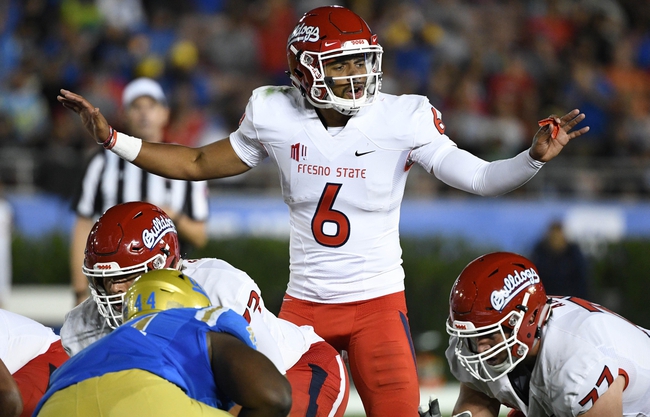 The San Diego State Aztecs dropped to 7-3 (4-2 MW) on the season after a shocking, 27-24, loss at home to the UNLV Rebels this past Saturday. San Diego State held a 24-13 lead entering the 4th quarter however, there defense couldn’t stop the Rebels when it mattered, and UNLV was able to secure the come from behind victory after scoring 14-unanswered points. San Diego State was outgained by UNLV by a 436-368 and committed two turnovers in the loss. Leading the way for the Aztecs was WR Tim Wilson Jr who had 123 receiving yards & 2 TD’s on 5 receptions.

The Fresno State Bulldogs had their 7-game winning streak snapped and dropped to 8-2 (5-1 MW) on the season after being defeated by the Boise State Broncos, 24-17, this past Saturday. Fresno State held a 17-3 lead early in the 3rd quarter, however, the offensive struggled down the stretch and the Bulldogs allowed Boise State to fight back for the come from behind victory after allowing 17 unanswered points. Fresno State was outgained by Boise State by a 448-390 margin and forced one turnover in the loss. Leading the way for the Bulldogs was WR KeeSean Johnson who had 95 receiving yards and a TD on 8 receptions.

San Diego State has been a tough team to get a read on this season however, there is no questioning that their offense doesn’t have many weapons outside of Juwan Washington. Fresno State has to be disappointed that they couldn’t hold on to their lead at Boise State however, this is still a very talented team that has an accurate QB (McMaryion), a talented WR (Johnson) and a defense that ranks 5th in CFB in scoring defense. As I just can’t see San Diego State recovering quickly from that loss to UNLV, I think Fresno State has no trouble at home covering this large home spread.