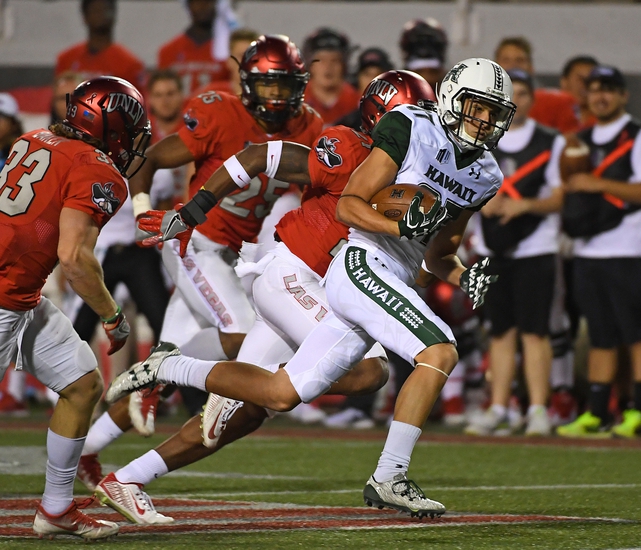 WAC college football brings us the UNLV Rebels taking the field at the Hawaii Warrior on Saturday.

The UNLV Rebels are looking to build off the momentum of a 27-24 upset of San Diego State as a 24 point road dog. UNLV won the yardage battle 436-368 with sides giving away the football twice.

Lexington Thomas was the work horse for UNLV with 133 yards and a pair of trips to the end zone on 21 totes while catching three passes for 34 yards. Darren Woods Jr. led the Rebels with four catches for 100 yards with Brandon Presley caught a ten yard TD pass.

The Hawaii Warriors are still in the Bowl hunt despite dropping four in a row following a 56-17 defeat to visiting Utah State as a 19 point underdog. Hawaii totaled 390 yards with a pair of turnovers while the Aggies amassed 601 yards with one giveaway.

Warriors quarterback Cole McDonald struggled to find receivers connecting on 18-45 for 331 yards and a pair of touchdowns along with two interceptions while topping the running game with 17 yards on nine carries.

I don't see a whole lot of defense being played so something on the over...