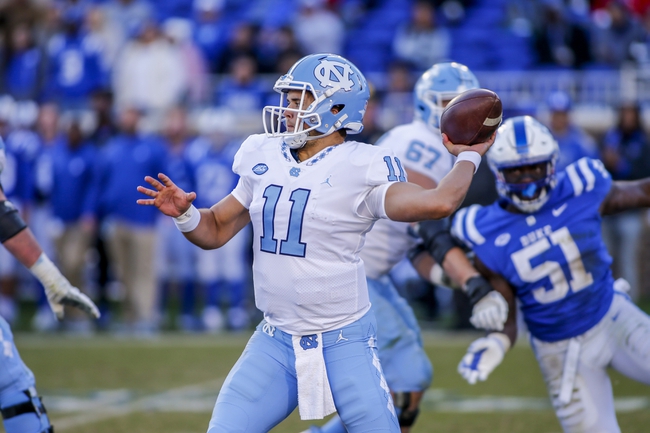 Western Carolina enters this one at 3-7 on the year. The Catamounts have beaten Newberry, Gardner-Webb and VMI but since fallen to Furman, Samford, Chattanooga, Mercer, East TN State, the Citadel and Wofford.

In the Wofford game, Western Carolina QB Tyrie Adams put up 229 yards and a pick, also leading the rush on 167 yards and a TD. Jordan Mathis was the top receiver for the Catamounts on 115 yards from seven grabs.

Over on the Tar Heels side, they’re sitting at 1-8 this year. Aside from a win over Pitt early in the season NC has fallen to Cal, East Carolina, Miami FL, Virginia Tech, Syracuse, Virginia, Georgia Tech and Duke.

In the Duke game, North Carolina QB Nathan Elliott put up 221 yards and a TD, and Michael Carter logged 148 and a TD on the ground. Tops in receiving for the Heels with 66 yards on six grabs.

The over is 4-0 in the Catamounts’ last four following a straight-up loss and 8-1 in their last nine after rushing for less than 100 yards in their previous game. Western Carolina is 0-3-1 ATS in their last four versus the ACC.

It’s been a lost season for Western Carolina ever since they opened with those three victories, but the good news is that they’re still scoring at a pretty good clip—aside from just six points against Chattanooga.

As for North Carolina, they’re in something of the same boat, putting up at least 21 points in each of their last four games but also giving up a ton on the other side.

This has the makings of an over, and I also like WCU to take the cover with that thick line.