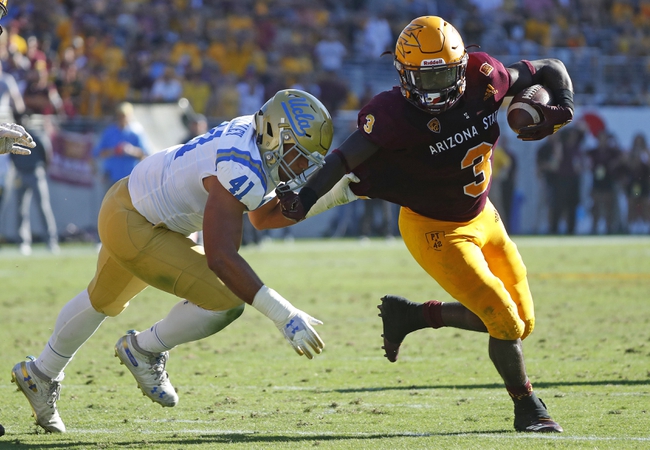 The Arizona State Sun Devils won their 3rd straight game and improved to 6-4 (4-3 Pac-12) on the season after defeating the UCLA Bruins, 31-28, this past Saturday. Arizona State had a surprisingly difficult time with the UCLA offense in this one, however, the Sun Devils were able to pull away late after a 1-yd TD run by Manny Wilkins gave Arizona State a 31-21 lead with 3:56 left in regulation. Arizona State outgained UCLA by a 480-439 margin and forced 1 turnover in the victory. Leading the way for the Sun Devils was RB Eno Benjamin who had 182 rushing yards and a TD on 34 carries.

The Oregon Ducks dropped to 6-4 (3-4 Pac-12) on the season after being defeated by the Utah Utes, 32-25, this past Saturday. Oregon’s defense couldn’t slow down a Utah offense that was without their starting QB (Tyler Huntley) or RB (Zach Moss) and allowed the Utes to secure the victory after scoring 10 unanswered points over the final 6:48 of regulation. Oregon was outgained by Utah by a 494-405 margin and lost the turnover battle by a 1-0 margin in the loss. Leading the way for the Ducks was QB Justin Herbert who completed 20 of 33 passes for 288 yards & 3 TD.

Arizona State continues to win games behind solid offensive performances by Wilkins, Benjamin, and Henry and an underrated defense that ranks 57th in CFB in total defense. It’s been a tough last month for the Ducks as after picking up that huge home victory against Washington, the Ducks have lost 3 of their last 4 games while their defense has given up an average of 32.8 ppg. Oregon is a tough place to play and have one of the best QB’s in the country in Justin Herbert, however, the Sun Devils are just playing better football at the moment and I think they’ll at worse be able to cover with the points.