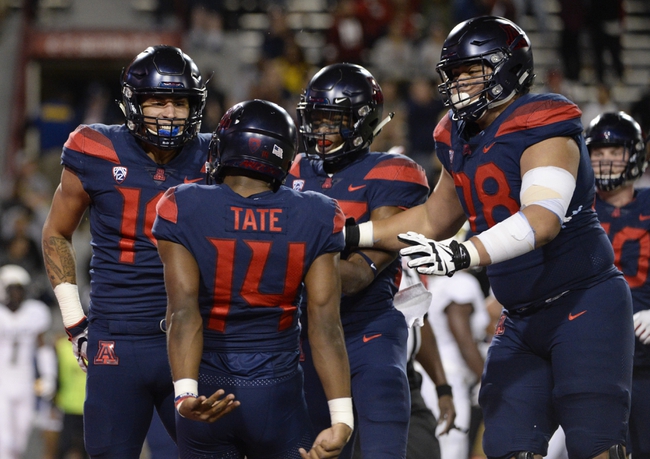 The Arizona Wildcats and the Washington State CoOugars face off at Martin Stadium this Saturday night in week 12 Pac-12 College Football action.

The Arizona Wildcats won their 2nd straight game and improved to 5-5 (4-3 Pac-12) on the season after defeating the Colorado Buffaloes, 42-34, on November 2nd. Arizona put up 26 points in the 2nd quarter to take a 26-24 halftime lead and was able to hang on late after a 57-yard TD reception by Cedric Peterson gave the Wildcats a 42-34 lead with 13:04 left in the 4th quarter. Arizona outgained Colorado by a 566-383 margin and forced the Buffaloes into committing two turnovers in the victory. Leading the way for the Wildcats was QB Kahili Tate who completed 17 of 22 passes for 5 TD and 1 INT.

The 8th ranked Washington State Cougars won their 6th straight game and improved to 9-1 (6-1 Pac-12) on the season after defeating the Colorado Buffaloes, 31-7, this past Saturday. Washington State went into halftime up by just a 10-7 margin, however, the defensive was outstanding in the 2nd half and the Cougars were able to pull away easily after taking a 24-7 lead with 14:27 left in the 4th quarter. Washington State outgained Colorado by a 477-297 margin and won the turnover battle by a 3-0 margin. Leading the way for the Cougars was QB Gardner Minshew II who completed 35 of 58 passes for 335 passing yards & 2 TD.

Washington State has been able to rack up wins with their outstanding passing attack and above average defense, however, it will be important that they don’t overlook the Wildcats prior to their matchup next week agianst Washington. Arizona has looked much better over the last two weeks in their victories agianst Oregon & Colorado and although their passing defense can struggle, their offense has looked really dangerous with a healthy Kahlil Tate behind center and J.J. Taylor in the backfield. I think Washington State is going to win this game, however, as I think the Wildcats are going to make it a competitive game, I’m taking the Wildcats to cover with the points.