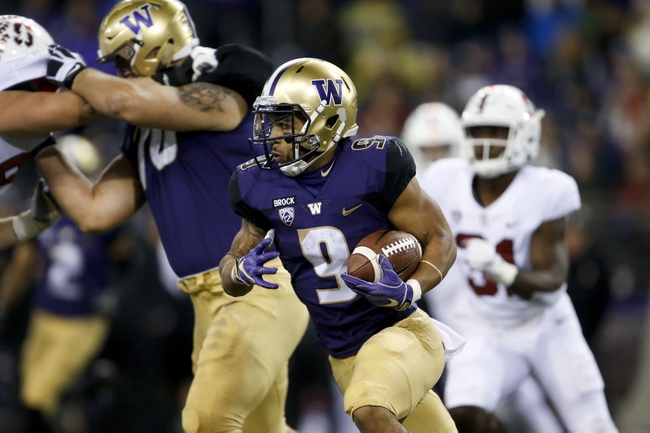 The Oregon State Beavers lost their 2nd straight game and dropped to 2-8 (1-6 Pac-12) on the season after being defeated by the Stanford Cardinal, 48-17, this past Saturday. Oregon State once again struggled on the defensive side of the ball and couldn’t fight back after Stanford went into halftime with a 34-17 lead. Oregon State was outgained by Stanford by a 596-404 margin and forced just 1 turnover in the loss. Leading the way for the Beavers was WR Trevon Bradford who had 120 receiving yards and a TD on 5 receptions.

The 25th ranked Washington Huskies improved to 7-3 (5-2 Pac-12) on the season after defeating the Stanford Cardinal, 27-23, on November 3rd. Washington raced out to a 21-0 after a 6-yd TD run by Myles Gaskin early in the 2nd quarter and was able to hang on late after a 38-yd FG by Peyton Henry gave the Huskies a 27-17 lead with 5:09 left in regulation. Washington was outgained by Stanford by a 424-371 margin however, won the turnover battle by a 3-0 margin. Leading the way for the Huskies was Myles Gaskin who had 148 rushing yards and a TD on 28 carries.

Oregon State has been able to put up some solid offensive numbers this season, especially in the running game, however, it’s still been a tough season for the Beavers as you just can’t pick up many victories when your defense is ranked next to last in CFB in scoring defense. Washington has had a disappointing season after coming into this season with hopes of being in the CFB Playoffs, however, they still do have something to play for as they are still in contention for a Pac-12 Championship with a big game agianst Washington State next weekend. Washington’s 25th ranked rushing defense should give Oregon State some trouble on the offensive end and as I think Browning & Gaskin have big days on the offensive end, I’m taking Washington to cover this large home spread.