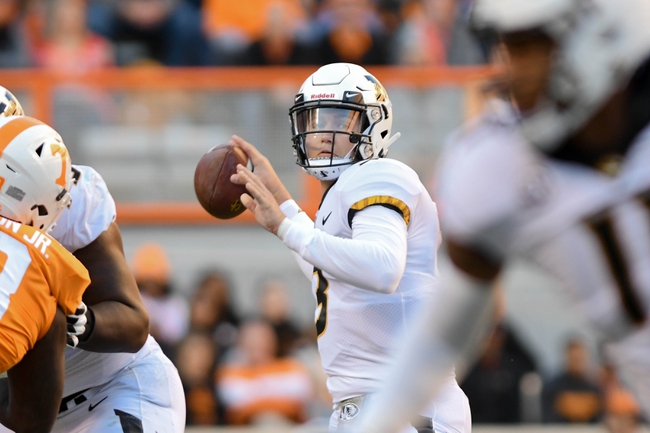 The Arkansas Razorbacks and the Missouri Tigers meet in an SEC conference college football matchup from Memorial Stadium at Faurot Field on Friday afternoon.

The Arkansas Razorbacks look to finish their season on a high note after falling to 2-9 with a 52-6 loss to Mississippi State in their last outing. Ty Storey leads the Hogs with 1,560 passing yards, 11 touchdowns and 9 picks on 57.2% passing while Rakeem Boyd leads Arkansas on the ground with 729 rushing yards this season. La’Michael Pettway leads the Hogs with 474 receiving yards with 4 touchdowns while Cheyenne O’Grady has a team-high 29 grabs for 383 yards and an Arkansas-leading 6 receiving touchdowns this season. As a team, Arkansas is averaging 348.5 yards of total offense and 23.6 points per game this season.

The Missouri Tigers will look to finish the season strong after making it 3 straight victories with a 50-17 win over Tennessee in their last outing. Drew Lock has thrown for 2,904 yards, 23 touchdowns and 8 interceptions on 63.1% passing while the tandem of Larry Rountree III and Damarea Crockett have combined for 1,602 yards and 17 rushing touchdowns this season. Emanuel Hall leads the Tigers with 603 receiving yards and Johnathon Johnson leads Mizzou with 48 catches for 536 yards with each having 4 touchdowns while Albert Okwuegbunam has 43 grabs for 466 yards and a team-high 6 touchdowns this season. As a team, Missouri is averaging 474.4 yards of total offense and 36.8 points per game this season.

I think Vegas is taking advantage of the fact that the home team has had so much success against the spread in this matchup, as three scores seems a bit excessive. However, Arkansas, despite having success ATS lately, have lost their last 3 road games by a combined score of 110-26. I think Missouri is capable enough offensively to get the job done and will want to end the season on a high note so I’ll lay the points with the Tigers as I just don’t see Arkansas keeping this one close.