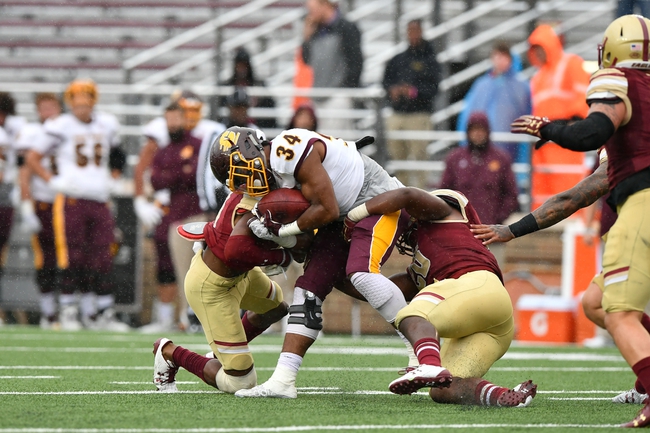 The Central Michigan Chippewas end the season at the Toledo Rockets in week 13 college football.

The Central Michigan Chippewas have struggled to find the end zone in 2018 and that trend continued in a 24-13 loss to Bowling Green as a touchdown favorite. Bowling Green won the yardage battle 320-166 with 38+ minutes of possession while CMU turned the ball over two times with a fumble returned for six.

Chippewas quarterback Austin Hergott completed 11-21 for 94 yards and a touchdown along with an interception while losing 15 yards on a pair of runs.

Romello Ross was the top runner for Central Michigan with 33 yards on 13 carries with Jonathan Ward scoring on an eight yard run. Jordan Hicks was the bright spot in the Chippewas receiving corps with a pair of receptions including a 30 yard scoring catch.

The Toledo Rockets have saved their season and become Bowl eligible with wins in three of four capped off by a 56-34 victory at Kent State as a 12 point road favorite. Toledo held a slight 517-497 yardage edge but returned a punt for a score and had a pick six.

Eli Peters gave the Rockets a solid passing attack connecting on 11-14 for 131 yards and a pair of touchdowns while gaining five yards on his only carry.

Bryant Koback exploded on the ground with 192 yards and a pair of TD’s on 17 touches while Art Thompkins gave Toledo another rushing option with 122 yards on 14 totes and two more trips to the end zone. Jon’Vea Johnson gave the Rockets a threat in the air with a 55 scoring reception as the team scored in multiple ways.