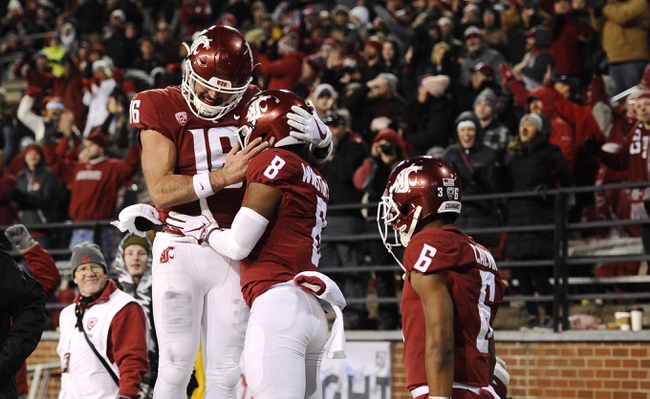 The 18th Washington Huskies won their 2nd straight game and improved to 8-3 (6-2 Pac-12 north) on the season after defeating the Oregon State Beavers, 42-23, this past Saturday. Washington jumped all over Oregon State early in this one and had no trouble securing the victory after taking a 28-3 lead with :40 seconds left in regulation. Washington outgained Oregon State by a 503-363 margin and won the turnover battle by a 2-0 margin. Leading the way for the Huskies was QB Jake Browning who completed 17 of 23 passes for 242 passing yards & 3 TD’s.

The 8th ranked Washington State Cougars won their 7th straight game, improving to 10-1 (7-1 Pac-12 North) on the season after defeating the Arizona Wildcats, 69-28, this past Saturday. Washington State and their top-ranked passing attack had no trouble carving up the Wildcats secondary and had no trouble securing the victory after they went into halftime with a 55-14 lead. Washington State outgained Washington by a 605-431 margin and won the turnover battle by a 4-0 margin. Leading the way for the Cougars was QB Gardner Minshew who completed 43 of 55 passes for 473 yards & 7 TD’s.

This is going to be a great game as not only is this a great rivalry, the winner of this game will advance to the Pac-12 Championship. Washington has had a solid season and comes in with one of the best defenses in the country as they rank 10th in scoring defense, however, the Huskies have been much more vulnerable against the pass this season. Washington State still has a very outside shot at the CFB Playoffs and as it just doesn’t seem like any defense can slow done Mike Leach and Gardner Minshew passing attack, I’m taking Washington State to win the Apple Cup and cover this small spread.