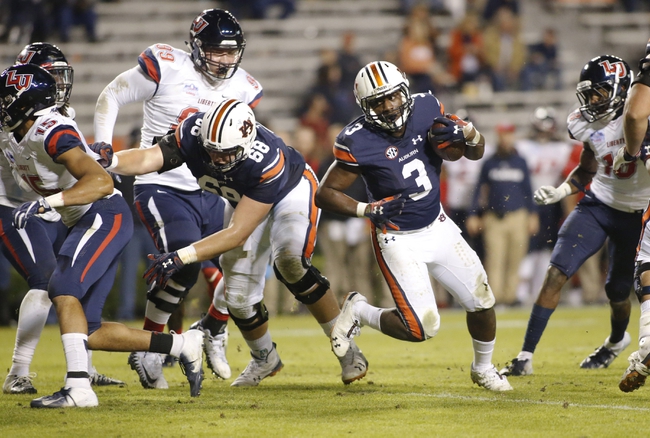 The Auburn Tigers and the Alabama Crimson Tide meet in another instalment of the Iron Bowl from Bryant-Denny Stadium on Saturday afternoon.

The Auburn Tigers will look to find some consistency after splitting their last 6 games following a 53-0 win over Liberty in their last outing. Jarrett Stidham has thrown for 2,294 yards, 12 touchdowns and 4 interceptions on 61.6% passing while JaTarvious Whitlow leads Auburn in rushing with 716 yards and 4 touchdowns this season. Ryan Davis leads Auburn with 60 catches for 508 yards while Seth Williams has 479 receiving yards and 5 touchdowns and Darius Slayton has 30 grabs for 447 yards this season. As a team, Auburn is averaging 381.8 yards of total offense and 28.9 points per game this season.

The Alabama Crimson Tide will look to finish the regular season unbeaten heading into the SEC championship game after improving to 11-0 with a 50-17 win over the Citadel in their last outing. Tua Tagovailoa has thrown for 2,865 yards, 31 touchdowns and 2 interceptions on 69.2% passing this season while Damien and Najee Harris have combined to rush for 1,317 yards and 11 touchdowns and Joshua Jacobs has added 9 rushing touchdowns this season. Jerry Jeudy leads the Tide in receiving with 51 grabs for 1,002 yards and 10 touchdowns while Jaylen Waddle and Henry Ruggs III each have 34 receptions with Waddle adding 617 receiving yards and 5 touchdowns compared to Ruggs III’s 613 yards and 8 touchdowns this season. As a team, Alabama is top-10 in terms of total yardage (541.5 YPG/3rd in FBS), passing yardage (328 YPG/7th) and scoring (48.7 PPG/3rd) this season. The Tide as usual are also stout defensively, allowing just 13.1 points per game this aseason.

Alabama has won 7 out of the last 10 Iron Bowls, but despite the way the season has gone, something seems off about laying this kind of line in this kind of game, even with Alabama. The Tide have beaten down on a lot of opposition this season, winning each of their last 7 games by 24 points or more. The problem for me is that Auburn fell out of the hunt a while ago, so you know these kids at Auburn will have had this date circled on their calendars for a while now. I’m not saying the Tigers win this outright, but I think the pride that’s on the line is worth something as well, so I’ll take Auburn and the points in this one.