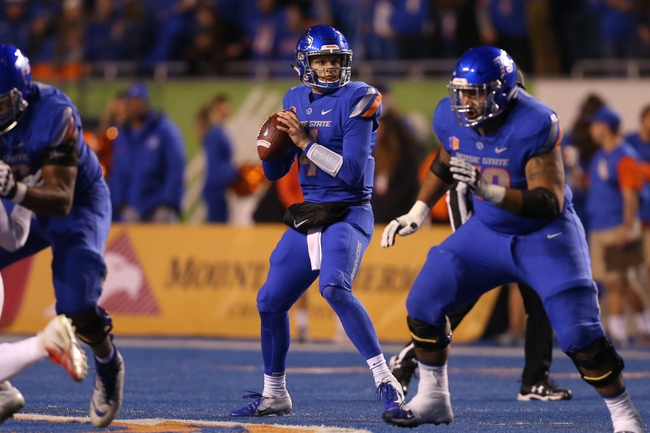 The Utah State Aggies will look for another win to add to their 10-game winning streak following a 29-24 win over Colorado State to improve to 10-1 this season. Jordan Love has thrown for 2,845 yards, 25 touchdowns and 4 interceptions on 66.4% passing while Darwin Thompson and Gerold Bright have combined to rush for 1,667 yards and 22 touchdowns this season. Ron’Quavion Tarver leads the Aggies’ receiving group with 56 catches for 600 yards and 6 touchdowns while Jalen Greene has 30 grabs for 491 yards and 4 TDs. As a team, Utah State is averaging 500.1 yards of total offense while owning the 2nd-highest scoring offense in the country with 49.3 points per game this season.

The Boise State Broncos will look to extend their own winning streak which currently sits at 6 games following a 45-14 win over New Mexico in their last outing. Brett Rypien has thrown for 3,270 yards, 28 touchdowns and 7 picks on 68.5% passing while Alexander Mattison has rushed for 1,015 yards and 13 touchdowns this season. Sean Modster leads Boise State with 59 grabs for 852 yards and 7 touchdowns while A.J. Richardson has 45 catches for 727 yards and 8 TDs and John Hightower has 6 touchdown receptions this season. As a team, Boise State is averaging 465 yards of total offense and 37.4 points per game this season.

Utah State hasn’t had a ton of success ATS when these two meet up, but the fact is that this Utah State team may be one of the best ones in program history, and the Aggies are solid offensively. Utah State has scored 31 or more points in all but two of their games this season and while Boise State has had offensive outbursts of their own, I just trust Utah State a bit more, so I’ll take a stab at the Aggies with the free field goal here.