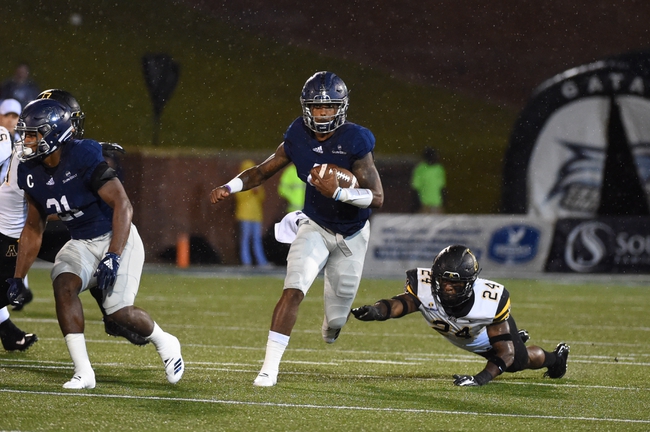 The Georgia Southern Eagles look to end their season with consecutive wins after upending Coastal Carolina 41-17 as an eight point road favorite. Georgia Southern dominated the box score with 442 yards while allowing only 189 yards.

Eagles quarterback Shai Werts only threw six times and completed four for 33 yards while running for 33 yards and a touchdown. Three different GSU receivers recorded receptions in a very run heavy offense. Wesley Fields led the Georgia Southern grinding ground game with 148 yards and a pair of touchdowns while Monteo Garrett and Logan Wright combined for another 147 yards with each finding the end zone.

The Georgia State Panthers are in the midst of a six game slide capped off by a 45-17 defeat at Appalachian State Mountaineers. Georgia State was outgained 524-329 and gave the ball away twice as a four touchdown underdog.

Panthers quarterback Dan Ellington connected on 10-21 for 132 yards and a touchdown along with a pair of interceptions including a pick six.

Ellington also topped GSU on the ground with 113 yards on 19 totes while Tucker Gregg added 43 yards on four carries. Cornelius McCoy and Penny Hart were the main targets in the passing game with four receptions for 95 yards.