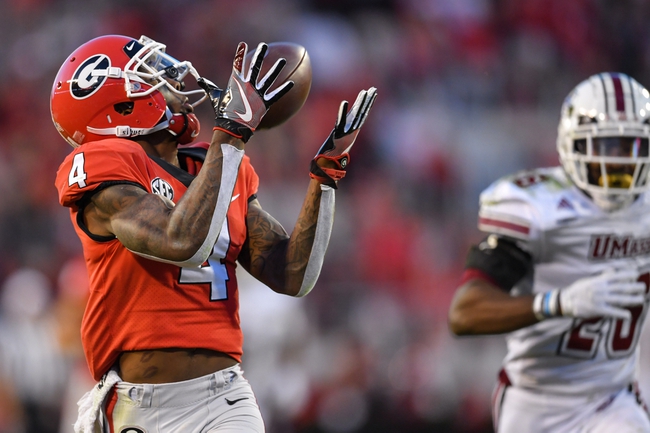 The Georgia Tech Yellow Jackets and the Georgia Bulldogs face off in another edition of Clean, Old Fashioned Hate from Sanford Stadium on Saturday afternoon.

The Georgia Bulldogs will look to build on their current 4 game winning streak following a 66-27 win over UMass in their last outing. Jake Fromm has thrown for 2,061 yards, 20 touchdowns and 5 interceptions while the tandem of D’Andre Swift and Elijah Holyfield have combined to rush for 1,674 yards and 14 touchdowns this season. Mecole Hardman leads the Dawgs with 475 receiving yards, coming on 31 catches with 5 touchdowns while Riley Ridley has 32 grabs for 441 yards and a team-high 6 touchdowns this season. As a team, Georgia is averaging 484.5 yards of total offense and 39.6 points per game this season.

Georgia has won 14 of the last 17 meetings between these two teams, including last year’s meeting 38-7 and I think the Bulldogs may have even gotten better since then. However, Georgia Tech appears to always have this game circled on their calendars, as 4 of the last 5 meetings have been decided by single digits, including a pair of overtime games thrown in there as well. I’m not saying the Yellow Jackets win this outright, but their option offense, when it gets going, chews up clock and takes away time for Georgia to put points on the board. At the end of the day, I think Georgia wins, but Georgia Tech is more than capable of keeping this one reasonably close, so I’ll take a chance on the Yellow Jackets and the points here.