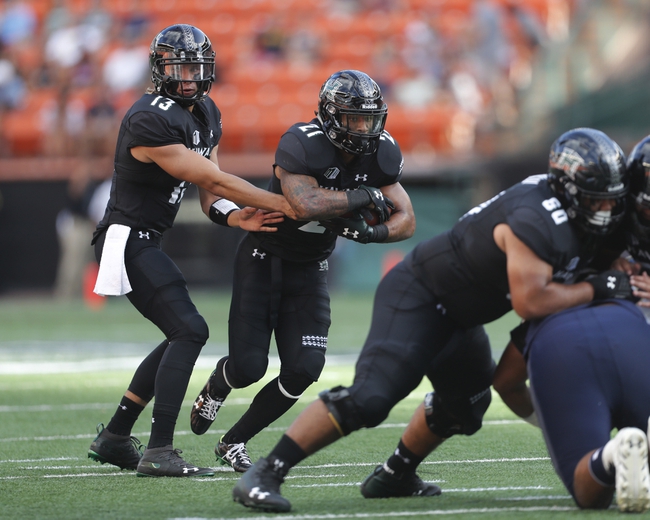 The Hawaii Warriors snapped a three game slide with a 35-28 victory against UNLV as a touchdown home favorite in week 12. Hawaii mustered a 411-308 yardage edge with a pair or turnovers and needed a 22 point 4thquarter run to secure the win.

Warriors quarterback Cole McDonald struggled to hit receivers completing 14-30 for 175 yards and a pair of interceptions before Chevan Cordeiro rallied the team on just 4-5 for 153 yards and three 4thquarter TD’s.

McDonald ran for 24 yards and a score on 15 carries but the Warriors rushing attack was non-existent. John Ursea and JoJo Ward spurred the UH offense with a combined eleven receptions for 257 yards with three touchdowns.

The San Diego State Aztecs have been struggling over the second half of the season with losses in three of four following a 23-14 defeat at Fresno State in week 12. San Diego State defended well with 390 yards allowed but managed only 282 yards and eight first downs.

Christian Chapman struggled to throw the ball hitting just 4-13 for 126 yards and a touchdown before Ryan Agnew gave the Aztecs a boost completing 4-8 for 92 yards and another touchdown.

SDSU had zero success on the ground with Juwan Washington leading the team with 38 yards on 19 carries but Fred Trevillion kept the game competitive with four receptions covering 189 yards with two scoring catches.

Hawaii doesn’t do much away from home and San Diego State has been ordinary at best but beats the Warriors. Not real happy with either side…

The pick in this article is the opinion of the writer, not a Sports Chat Place site consensus.
Previous Pick
Boise State vs. Utah State - 11/24/18 College Football Pick, Odds, and Prediction
Next Pick
College Football Picks and Odds Podcast Week 13 2018: Sports Pick Info