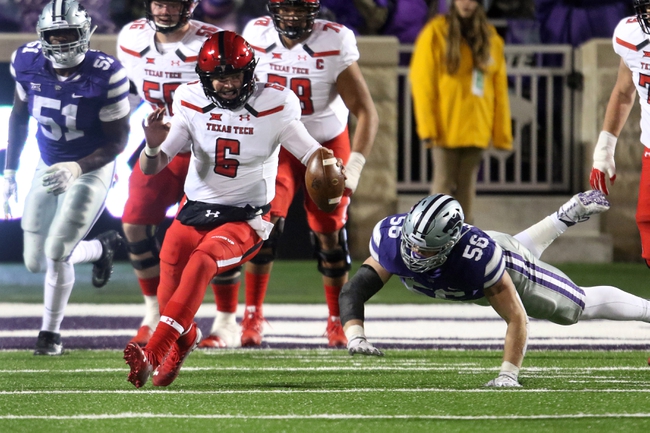 The Baylor Bears and the Texas Tech Red Raiders meet in a Big 12 conference college football matchup from AT&T Stadium on Saturday afternoon.

The Baylor Bears will look to rebound after losing 4 of their last 5 games following a 16-9 loss to TCU in their last outing. Charlie Brewer has thrown for 2,327 yards, 14 touchdowns and 7 interceptions on 60.4% passing while John Lovett and JaMycal Hasty have combined for 797 yards and 7 rushing touchdowns this season. Jalen Hurd leads the Bears with 66 catches for 905 yards with 4 receiving touchdowns while Denzel Mims has 44 grabs for 634 yards and a team-high 6 receiving touchdown this season. As a team, Baylor is averaging 438.4 yards of total offense and 27.6 points per game this season.

The Texas Tech Red Raiders will look to snap a 4 game losing skid after a 21-6 loss to Kansas State in their last outing. Alan Bowman leads Texas Tech with 2,638 yards, 17 touchdowns and 7 interceptions while Jett Duffey has thrown for 1,221 yards, 8 touchdowns and 6 picks while also leading the Red Raiders in rushing with 369 yards and 4 touchdowns. Ta’Zhawn Henry has 341 rushing yards and a team-high 8 rushing scores this season. Antoine Wesley leads Texas Tech with 84 catches for 1,375 yards and 9 touchdowns while Ja’Deio High has 715 receiving yards and T.J. Vasher has 48 catches for 626 yards and 7 TDs this season. As a team, Texas Tech is averaging 496.8 yards of total offense and 38.5 points per game this season.

This is a winner take all for bowl eligibility so I’m expecting all hands on deck for this one. With that said, this game to me comes down to who has the more trustworthy offense, and that Texas Tech. Both teams have their ups and downs on defense, and maybe I’ll give a slight edge to Texas Tech on the defensive side of the ball. But the extra offense that Tech provides is the difference, so I’ll lay the touchdown with the Red Raiders here.