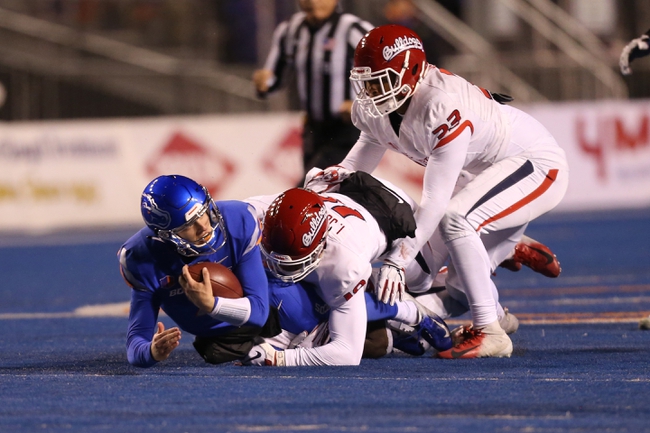 The Fresno State Bulldogs and the Boise State Broncos face off on Saturdy in the MWC college footbll championship game.

The Fresno State Bulldogs improved to 10-2 with a 31-13 victory against visiting San Jose State. Fresno State didn’t get their offense going until the second half but still racked up 515 yards and two lost fumbles while the Spartans totaled 367 yards with a 95 yard pick six.

Marcus McMaryion led a productive Bulldogs passing attack connecting on 20-29 for 317 yards and a pair of touchdowns while adding 30 rushing yards on three totes.

Ronnie Rivers gave Fresno State a solid presence on the ground with 92 yards on 17 carries while catching three passes for 41 yards and a score. The Bulldogs received another 55 yards rushing yards and a score from Jordan Mims while KeeSean totaled 173 yards on seven receptions and a TD.

The Boise State Broncos landed a spot in the Mountain West championship game on the strength of a 33-24 win versus Utah State that upped their record to 10-2. Boise State racked up 509 yards and were mistake free while the Aggies mustered 425 yards and committed a pair of turnovers.

Broncos quarterback Brett Rypien was efficient and explosive completing 23-32 for 310 yards and a touchdown with seven different players recording catches.

Alexander Mattison was the Broncos workhorse on the ground with a monster 37 carries for 200 yards with three trips to the end zone while logging three receptions for 12 yards. CT Thomas. Sean Modster and AJ Richardson were the Boise State top receiving options with a combined 15 receptions 247 yards.