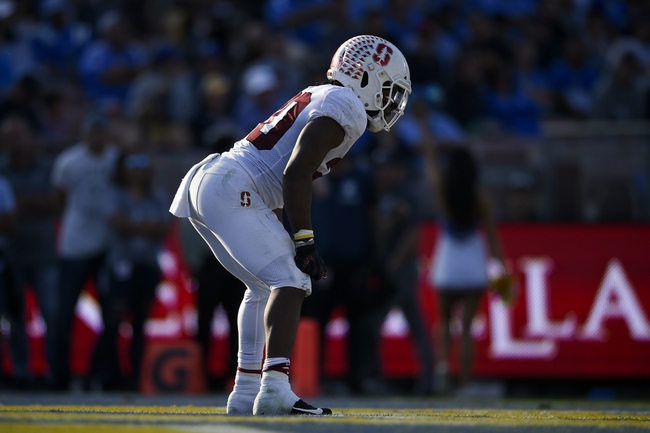 The Stanford Cardinal take the field with the Cal Colden Bears in PAC-12 college football action on Saturday.

The Stanford Cardinal needed a huge effort from their offense in downing UCLA 49-42 to up their record to 7-4. Stanford was outgained 528-470 but won the turnover battle 2-1 although the Bruins scored on a 93 yard kick return.

KJ Costello carried the Cardinal pass happy offense connecting on 23-37 for 344 yards and five touchdowns and an interception while running twice for nine yards.

Bryce Love gave Stanford some yardage on the ground with 85 yards on 22 carries but subtract a 22 yard run and he averaged just over three yards per touch.

JJ Arcega-Whiteside was the top Cardinal receiving option with seven catches for 106 yards and three touchdowns with Trent Irwin totaling 103 yards and a TD on seven catches while Osiris St. Brown caught a 52 yard scoring strike.

The Cal Golden Bears improved to 7-4 following a 33-21 victory versus visiting Colorado which denied the Buffaloes Bowl eligibility. Cal was outgained 318-211 but played mistake free football and took full advantage of five Colorado turnovers with a pair of interceptions returns for touchdowns.

Golden Bears quarterback Chase Garbers completed 14-26 for 116 yards and a pair of touchdowns while running for a team high 47 yards on 12 carries.