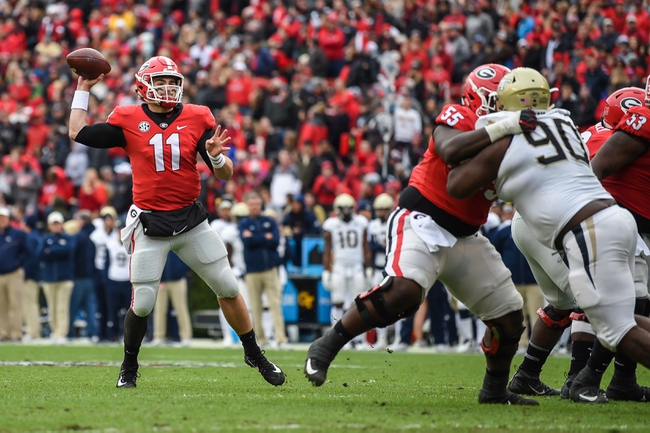 The Alabama Crimson Tide and the Georgia Bulldogs meet in the SEC Championship game from Mercedes-Benz Stadium in Atlanta on Saturday afternoon.

The Alabama Crimson Tide enter the SEC title game with a perfect 12-0 record, including an 8-0 mark in conference play to finish alone atop the SEC West division. Tua Tagovailoa has thrown for 3,189 yards, 36 touchdowns and 2 interceptions while Damien Harris and Najee Harris have combined to rush for 1,383 yards and 11 touchdowns and Joshua Jacobs has rushed for 9 touchdowns this season. Jerry Jeudy leads Alabama’s receiving corps with 56 grabs for 1,079 yards and 11 touchdowns while Jaylen Waddle, Henry Ruggs III and Irv Smith Jr. each have 600+ receiving yards, with Ruggs III leading the group with 10 touchdowns this season. As a team, Alabama is averaging 538 yards of total offense and the 2nd-most points per game in the country with 49 points per game this season. The Tide are also stout defensively, allowing just 13.8 points per game this season, the 3rd-fewest in the country.

The Georgia Bulldogs enter this game as winners of the SEC East division after an 11-1 season, including 7-1 in conference play. Jake Fromm has thrown for 2,236 yards, 24 touchdowns and 5 interceptions while D’Andre Swift and Elijah Holyfield have combined for rush for 1,858 yards and 16 touchdowns this season. Mecole Hardman leads Georgia’s receiving corps with 519 receiving yards while Riley Ridley has a team-high 34 grabs for 450 yards and 8 touchdowns this season. As a team, Georgia is averaging 481.4 yards of total offense and 40.1 points per game this season.

This game is technically a neutral site game, but with the game being in Atlanta you have to give a slight home field edge to Georgia here. With that said, Alabama has been routing opponents left and right this season, so I’m not surprised to see them favored here, but by double-digits against Georgia is in fact a bit puzzling. The Bulldogs have had their sights set on this game for a while now, and have had laser focus after realizing it was going to be Alabama on the other side after the national championship game last season. Georgia was also just on the outside looking in in the last playoff ranking, and with a loss by Michigan, this leaves the door open for Georgia to solidify a spot in the top 4 if they can pull out a win here. I think Georgia realizes the sense of urgency needed for this game, so I’ll take the Bulldogs and the points here.