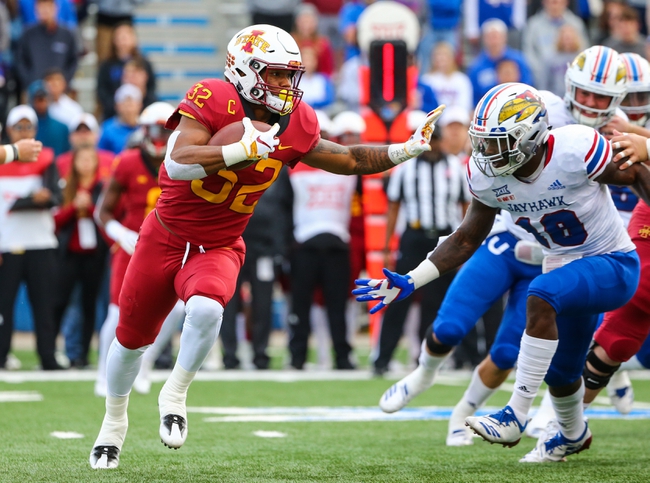 The Drake Bulldogs will travel to Jack Trice Stadium to take on the 25th ranked Iowa State Cyclones this Saturday afternoon in College Football action.

The FCS Drake Bulldogs won their 2nd straight game and improved to 7-3 (6-2 Pioneer) on the season after defeating the Morehead State Eagles, 43-6, on November 17th.  Drake led by just a 9-6 margin after the 1st quarter, however, scored 34 unanswered points the rest of the way to easily secure the victory. Drake outgained Morehead State by a 428-333 margin and won the turnover battle by a 2-1 margin in the victory. Leading the way for the Bulldogs was WR Steven Doran who had 5 receptions for 159 yards and 2 TD’s.

The 25th ranked Iowa State Cyclones improved to 7-4 (6-3 Big-12) on the season after defeating the Kansas State Jayhawks, 42-38, this past Saturday. Iowa State went down by a 38-21 margin with just 12:27 left in regulation, however, scored 21 unanswered points the rest of the way to secure the come from behind victory. Iowa State outgained Kansas State by a 493-428 margin however, did lose the turnover battle by a 3-1 margin in the loss. Leading the way for the Cyclones was RB David Montgomery who had 149 rushing yards & 3 TD’s on 19 carries.

This game is a make up game for the Cyclones after their season opening game against the South Dakota State Jackrabbits was cancelled due to weather. Originally, they were going to play Incarnate Word, however, as Incarnate Word received an FCS playoff spot, Drake replaced them for this matchup. Drake is a solid FCS team with a decent defense, however, it’s hard to image that the Bulldogs will be able to slow down an Iowa State offense that loaded with talent. This game has yet to be lined, however, as it will be the last game of the season that the Cyclones can put on a show for the home crowd, I’m initially leaning on taking Iowa State to cover a huge number.