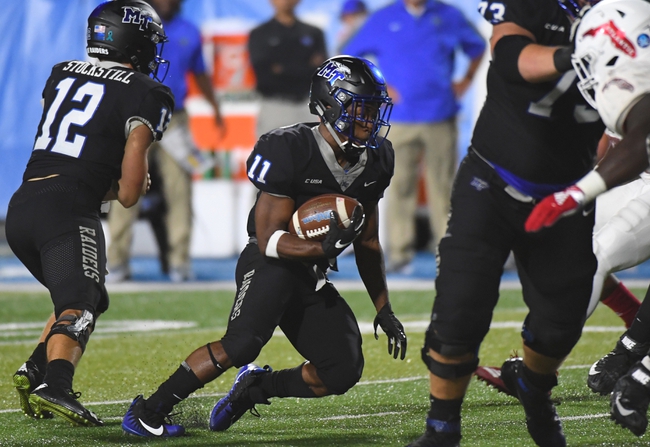 The UAB Blazers face the MTSU Blue Raiders for the second straight week but this time with the CUSA championship on the line.

The Alabama-Birmingham Blazers never got their offense going in a 27-3 loss to Middle Tennessee State to set up a rematch for the CUSA championship. Alabama-Birmingham had almost no offense to speak of with a season low 89 total yards.

Blazers quarterback AJ Erdely was inconsistent connecting on 9-20 for 90 yards and an interception while losing 48 rushing yards while Tyler Johnson III went 0-4 and ran once for six yards.

Jarrion Street was the top Alabama-Birmingham runner with 40 yards on 12 carries with the team unable to push the Blue Raiders defense off the line of scrimmage. Kailon Carter led the Blazers receiving corps with a pair of receptions for 49 yards with a 40 yard catch being the longest play from scrimmage.

The Middle Tennessee State Blue Raiders didn’t light up the scoreboard with 394 yards but the offense played mistake free football and controlled the clock with nearly 35 minutes of possession to secure a spot in the CUSA title game.

Chaton Mobley paced the Blue Raiders on the ground with 52 yards on 14 totes while Zack Dobson recorded a 45 yard scoring run and caught a scoring pass. Ty Lee was the top MTSU receiving option with 100 yards and a touchdown on seven receptions.