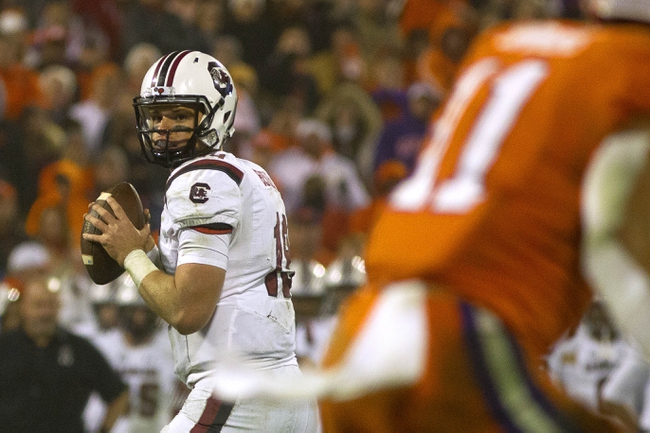 The Akron Zips and the South Carolina Gamecocks meet in college football action from Williams-Brice Stadium on Saturday afternoon.

The Akron Zips will look for a big road win to finish their season on a high note after 4 straight losses to fall to 4-7 this season, including a 49-28 loss to Ohio in their last outing. Kato Nelson has thrown for 2,151 yards, 15 touchdowns and 8 picks, while Van Edwards Jr. leads the Zips in rushing with 558 yards and 3 touchdowns this season. Andre Williams leads Akron’s receiving corps with 46 grabs for 649 yards and 6 touchdowns while Kwadarrius Smith has 27 catches for 469 yards and 3 scores. As a team, Akron is averaging 298.5 yards of total offense and 20.4 points per game this season.

The South Carolina Gamecocks will look to finish their season on a high note as well after a 56-35 loss to Clemson in their last outing. Jake Bentley has thrown for 2,754 yards, 24 touchdowns and 10 interceptions while Rico Dowdle has rushed for 552 yards and 4 touchdowns this season. Deebo Samuel leads the Gamecocks with 58 receptions for 849 yards and 9 touchdowns while Bryan Edwards has 47 grabs for 700 yards and 6 TDs. As a team, South Carolina is averaging 445.9 yards of total offense and 33 points per game this season.

Laying these kinds of numbers in a matchup where both teams have nothing really on the line is risky, because if South Carolina eases up and takes their foot off of the gas, Akron could slide in the backdoor for a cover, or the Gamecocks may not even reach the number on their own. However, South Carolina is going bowling this year and will want to carry as much momentum as possible heading into their bowl game, while Akron's season is done after this. There's also quite a few seniors on this Gamecocks team that will want to finish on a high note, so I'll lay the points with South Carolina as the Gamecocks should roll here.