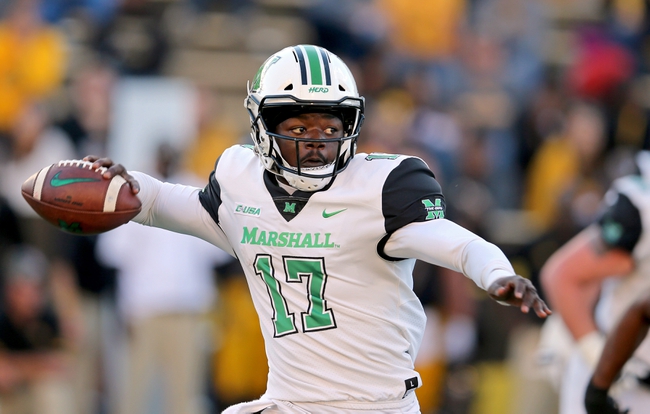 The Marshall Thundering Herd and the South Florida Bulls will meet up on Thursday in college football’s Gasparilla Bowl.

USF posted a 7-5 record this season. The Bulls opened up the year with a nice seven-game winning run, but they’ve lost their last five games to Houston, Tulane, Cincinnati, Temple and UCF.

In the Knights game, South Florida’s Chris Oladokun put up 77 yards with one TD and a pick, while Johnny Ford led the rush with 120 yards from 16 carries. Ford also topped the USF receivers on 39 yards and a score from two grabs.

Over on the Marshall side, they finished the regular season at 8-4 this year. The Herd stayed pretty competitive across the schedule, and finished off the year with a 3-1 mark over their final four games. Marshall’s one blemish came in a 41-20 loss to Virginia Tech in their last outing.

In the Hokies game, Marshall QB Isaiah Green logged 220 yards with one TD and one INT, and Brenden Knox racked up 204 yards with two scores on the ground. Armani Levias was the lead Herd receiver on 69 yards from five catches.

Over their losing streak, the Bulls haven’t looked great on either side of the ball. The USF offense has put up just 27 points across their last pair, and they’ve allowed at least 27 points in each of their last five outings.

As for Marshall, they’ve looked better scoreboard-wise, and even though they were drilled by VT the Herd were solid against a good FIU team.

I have to stick with Marshall on the cover here.