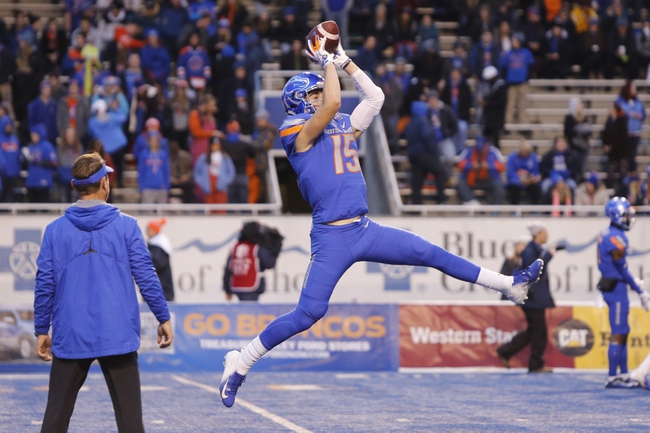 The Boston College Eagles and the Boise State Broncos will meet in the First Responder Bowl on December 26.

Boston College comes in here at 7-5 on the season. The Eagles have taken out UMass, Holy Cross, Wake, Temple, Louisville, Miami FL and Virginia Tech but fallen to Purdue, NC State, Clemson, Florida State and Syracuse.

In the Syracuse game, Boston College QB Anthony Brown logged 251 yards, three TDs and two picks, and AJ Dillon managed 56 yards to lead the rush. Jeff Smith’s 69-yard catch for a TD had him leading the receivers in that one.

Over on the Boise State side, they’re 10-3 this year. The Broncos have taken out Troy, UConn, Wyoming, Nevada, CO State, Air Force, BYU, Fresno State, New Mexico and Utah State, but fallen to OK State, San Diego State and then Fresno State in the Mountain West Conference championship.

In the 19-16 OT loss December 1, Boise State’s Brett Rypien had 125 yards with one TD and Alexander Mattison had 200 yards and a TD. Sean Modster logged 45 yards and a score on four catches.

Boston College skids into this one with a three-game losing streak, which oddly enough follows a three-game winning streak. Aside from Purdue, Clemson and Syracuse, the Eagles have been competitive against everyone they’ve faced, even in their other pair of defeats.

As for Boise, they’ve eked by a couple of teams they should have blown out, and had their opportunities versus Fresno State, but coming into this matchup I don’t see them having a ton of trouble. I’m going Broncos on the cover.

The pick in this article is the opinion of the writer, not a Sports Chat Place site consensus.
Previous Pick
Brandon Wimbush Transfer: Top 5 Schools To Land Notre Dame Quarterback
Next Pick
Miami-FL vs. Wisconsin - Pinstripe Bowl - 12/27/18 College Football Pick, Odds, and Prediction