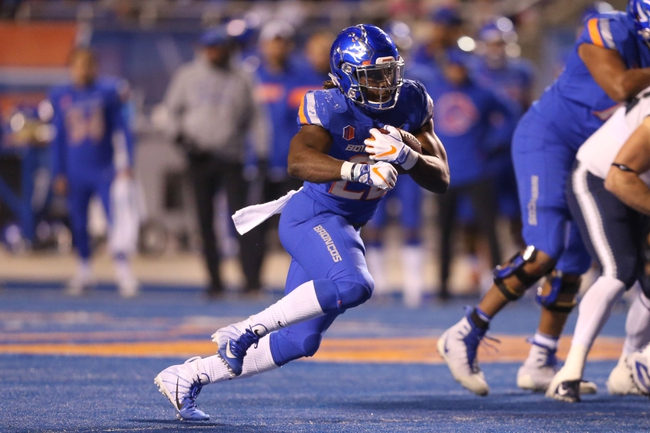 The Boston College Eagles and the Boise State Broncos meet in the First Responder Bowl in college football action from the Cotton Bowl on Wednesday afternoon.

The Boston College Eagles come into this game with a 7-5 overall record, including a 4-4 mark in ACC play, finishing the year on a 3-game losing streak. Anthony Brown has thrown for 2,121 yards, 20 touchdowns and 9 interceptions on 55.4% passing while AJ Dillon (who is questionable for this game due to an ankle injury) leads the Eagles on the ground with 1,108 rushing yards and 10 touchdowns this season. Kobay White leads the Eagles’ receiving corps with 32 catches for 510 yards along with 3 touchdowns while Jeff Smith has 403 receiving yards and a team-high 6 touchdowns and Tommy Sweeney has 32 catches of his own this season. As a team, Boston College is averaging 404.4 yards of total offense and 32 points per game this season.

The Boise State Broncos come into this game with a 10-3 overall record, including 7-1 in Mountain West conference play, good enough to finish at the top of the Mountain division, winning a tiebreaker against Utah State to book their spot in the conference title game where the Broncos fell to Fresno State by a final score of 19-16 in overtime. Brett Rypien has thrown for 3,705 yards, 30 touchdowns and 7 interceptions on 67.3% passing while Alexander Mattison leads the Broncos with 1,415 yards rushing along with 17 touchdowns. Sean Modster leads Boise State in receiving with 68 catches for 978 yards and 8 touchdowns while A.J. Richardson has 54 catches for 825 yards and 8 touchdowns of his own this season. As a team, Boise State is averaging 459.5 yards of total offense and 35.4 points per game this season.

Unless there’s something I’m missing, I’m not sure why this line is as low as it is. Both teams had a disappointing end to their regular season, but Boise State reached their conference championship game and almost had the title won. Boston College lost 3 in a row and Eagles QB Anthony Brown threw 4 of his 9 picks on the year in the final two games of the season. The running back battle between Brown and Mattison should be fun to watch, but I think the Broncos have a distinct edge in the aerial offense so I’ll lay the points with Boise State in this one.

The pick in this article is the opinion of the writer, not a Sports Chat Place site consensus.
Previous Pick
Brandon Wimbush Transfer: Top 5 Schools To Land Notre Dame Quarterback
Next Pick
Miami-FL vs. Wisconsin - Pinstripe Bowl - 12/27/18 College Football Pick, Odds, and Prediction