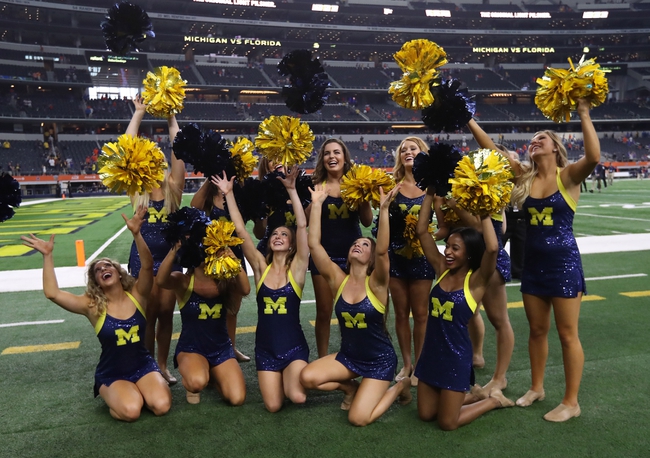 The Michigan Wolverines and the Florida Gators square off in the Peach Bowl from Mercedes-Benz Stadium in college football action.

The Michigan Wolverines come into this game as the #10 team in the country after a 10-2 regular season, including 8-1 in conference play where the Wolverines had carried a 10-game winning streak into their final game of the season and would’ve had a spot in the Big Ten championship game if it weren’t for a 62-39 loss to Ohio State that pretty much ended the Wolverines’ bowl hopes. Shea Patterson has thrown for 2,364 yards, 21 touchdowns and 5 interceptions while Karan Higdon leads the Wolverines in rushing with 1,178 yards and 10 touchdowns this season. Nico Collins leads Michigan’s receiving corps with 552 yards with 6 touchdowns while Donovan Peoples-Jones has a team-high 39 catches and 7 touchdowns to go along with 541 receiving yards this season. As a team, Michigan is averaging 427.2 yards of total offense and 36.8 points per game this season. The Wolverines also own the toughest defensive unit in the country, allowing just 262.5 yards of total offense per game.

The Florida Gators come into this one ranked #7 after a solid bounce-back campaign that saw the Gators finish with a 9-3 overall record, finishing with a 3-game winning streak after a 41-14 win over rival Florida State in their last outing. Feleipe Franks has thrown for 2,284 yards, 23 touchdowns and 6 interceptions on 58.5% passing while the tandem of Lamical Perine and Jordan Scarlett have combined to rush for 1,467 yards and 10 touchdowns this season. Van Jefferson leads the Gators’ receiving group with 31 catches for 439 yards and 6 touchdowns this season. As a team, Florida is averaging 426.8 yards of total offense and 34.5 points per game this season.

Florida has to be playing with a ton of confidence right now after getting back to a bowl game following a tumultuous season last year, and you know that coach Dan Mullen will have his guys ready. However, this is the first bowl game experience for some of the key players on Florida’s roster, including Feleipe Franks, so there’s bound to be some jitters, and going up against the toughest defensive unit in the country that’s ticked off about how they blew a chance to be in the national playoff isn’t the best opponent that you’d want in that situation. I think Michigan takes out some serious aggression on the Gators and win by at least a touchdown here so I’ll lay the points.