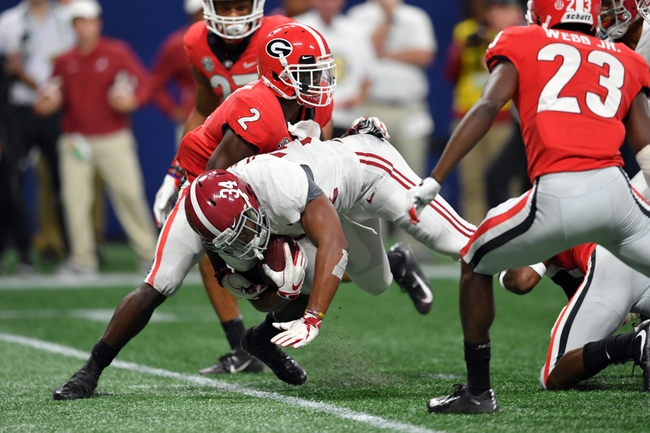 The Alabama Crimson Tide and the Oklahoma Sooners meet in college football action as part of the Orange Bowl on Saturday night.

The Oklahoma Sooners come into this game as the #4 seed in the College Football Playoff, entering the Orange Bowl with a record of 12-1, including an 8-1 mark in Big 12 play to earn a spot in the conference title game, avenging their only loss of the season with a 39-27 win over Texas in the Big 12 title game. The Sooners offense was also dynamic, breaking the 40-point barrier 10 times this season, 50 points a total of 7 times and 60 points twice. Kyler Murray has thrown for 4,053 yards, 40 touchdowns and 7 interceptions while also rushing for 892 yards and 11 touchdowns. Kennedy Brooks leads the Oklahoma offense with 1,021 yards and 12 touchdowns while Trey Sermon has 928 yards and 12 touchdowns on the ground as well. Marquise Brown leads the Sooners’ receiving corps with 75 catches for 1,318 yards and 10 touchdowns while CeeDee Lamb has 57 grabs for 1,049 yards and 10 TDs of his own. As a team, Oklahoma owns the highest-producing offense in the country, sitting top in FBS in total offense with 578.1 yards of total offense and 49.5 points per game this season.

The Alabama Crimson Tide enter this game as the top-ranked team in the country, coming into this game with a 13-0 record, including 8-0 in SEC play to advance to the SEC championship game where the Tide defeated Georgia by a final score of 35-28. Tua Tagovailoa has thrown for 3,353 yards, 37 touchdowns and 4 interceptions on 67.7% passing while Damien Harris has rushed for 771 yards and 7 touchdowns and Najee Harris has 679 rushing yards and Josh Jacobs has 11 rushing touchdowns this season. Jerry Jeudy leads Alabama’s receiving corps with 59 catches for 1,103 yards and 12 touchdowns while Jaylen Waddle has 803 receiving yards with 7 touchdowns and Henry Ruggs III has 724 yards and 10 touchdowns this season. As a team, Alabama is also one of the top teams offensively in FBS, sitting 5th in total offense, averaging 527.6 yards of total offense per game and 2nd in the country with 47.9 points per game this season. The Crimson Tide are also one of the nation’s best defensively, giving up the 4th-fewest points per game in the country, allowing just 14.8 points per game this season.

This in my opinion will no doubt be the toughest test that the Sooners will have faced in terms of an opposing defense this season, as the Big 12 had the reputation of an offense-first conference this season. With that said, as good as the Tide are on defense, I’m not sure how confident I am in laying two touchdowns with an Alabama team that has a less than 100% Tua Tagovailoa under center. The Alabama QB has said he feels about 80-85% good for the Orange Bowl, but sometimes, in a game like this, you need to be at 100%. Kyler Murray and the Sooners offense has the ability to go shot for shot with the Tide and have a fair chance at winning this one outright but I think the game will be decided by a touchdown, so I’ll take the points with Oklahoma in this spot.