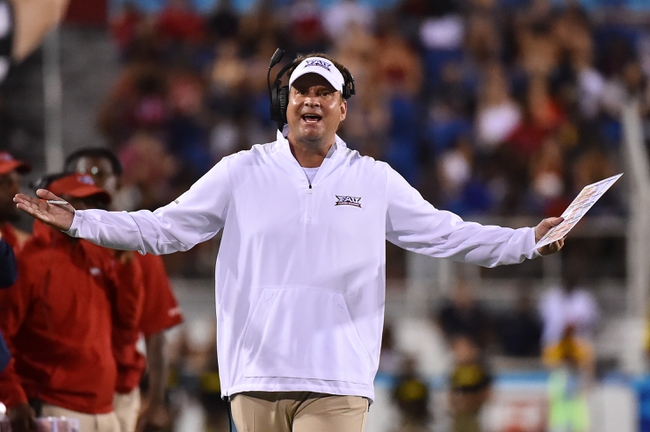 Five Coaches Who Could Replace Mark Richt At Miami

After three seasons with the Miami Hurricanes, this year being the most frustrating, coach Mark Richt decides to retire. Richt finished three seasons with a 26-13 record that included one bowl victory and a trip to the ACC Championship Game.

Now, the Hurricanes are forced to bring in a new head coach and likely sooner than later with national signing day approaching.

Here are five realistic candidates to become the new head coach of the Miami Hurricanes.

Butch Davis - Butch Davis was key in help turning Miami into the football school it is today, as he coached the Canes from 1995 to 2000, winning all four bowl games and three Big East titles. Davis also either recruited or coached Hurricanes legends such as Ray Lewis, Ed Reed, Clinton Portis, Reggie Wayne and Andre Johnson. Davis has currently led the FIU Golden Panthers to a 17-9 record in two seasons, proving he’s still got it. This would be a safe hire that would improve the team while keeping the alumni happy.

Mario Cristobal - Mario Cristobal has done a wonderful job with the Oregon Ducks in such a short span and it’s only going to improve with the recruiting class he’s brining along. The problem is Cristobal is a Miami guy at heart, as he was born here, played here and got his coaching start here back in 1998. Cristobal has deep ties to the South Florida area, which would help the Canes dominate recruiting and get back to keeping the top tier players home. Oregon isn’t a bad gig, so it may require Miami to cut the big boy check, but we see coaches leave for their home school all the time. Cristobal could easily come back to the U.

Lane Kiffin - It’s only a matter of time before Lane Kiffin leaves the FAU Owls, and he’ll likely do so sooner than later before his stock falls any further after a 5-7 season. If you look past some of his antics and non traditional ways of doing things, Kiffin is an offensive mastermind and a fabulous recruiter. Guys want to play for Kiffin, and he does a wonderful job of putting his players in a position to succeed. Nearly every time his teams have difference makers on offense, Kiffin’s teams produce and produce well. Kiffin also has the approval of Luther Campbell, who has been pushing hard for this hire on Twitter.

Greg Schiano - Greg Schiano was a strong candidate for the Miami job before they hired Richt. Schiano was a defensive coordinator for the Hurricanes in 1999 and 2000, leading the Canes to one of the best defenses in the country. Schiano also had a winning record in 11 years coaching the Rutgers Scarlet Knights, which is an accomplishment worth repeating. Not a sexy hire, especially with the controversy’s he’s had over the years, but Schiano has an extensive defensive resume and could help Miami return to its roots of smashmouth football.

Manny Diaz - It doesn’t look good saying you’re going to coach somewhere and then leaving a few days later, but it’s not new in this messy coaching business. Diaz is supposed to be the coach of the Temple Owls, but I’m 100 percent positive he’d pick Miami over Philadelphia if given the choice. Diaz is from Miami and loves this city more than anything if you know his history. Diaz is one of the better defensive minds in the country, is one of the main reasons for Miami’s recent success and is somebody players want to play for. Diaz is also an underrated recruiter and has helped land guys such as Darius James, D.J. Johnson, Leo Lewis and Gurvan Hall. It all comes down to if Diaz signed the contract or not.