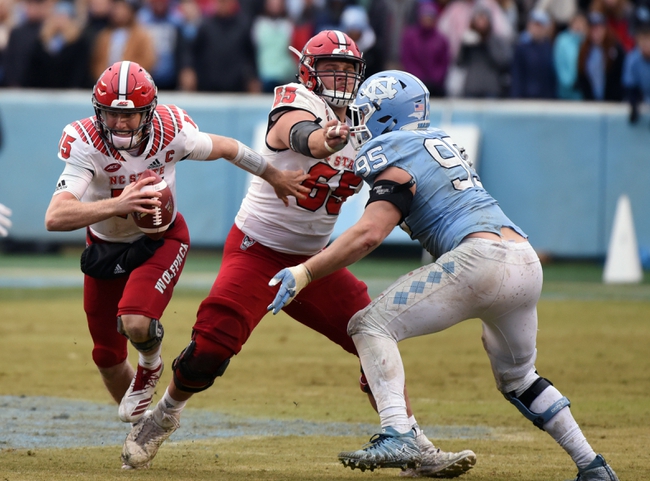 The NC State Wolfpack and the Texas A&M Aggies square off in the Taxslayer Gator Bowl from TIAA Bank Field in college football action.

The NC State Wolfpack come into this bowl game fresh off of a solid 9-3 campaign, including 5-3 in ACC play and finishing the year on a 3-game winning streak. Ryan Finley has thrown for 3,789 yards, 24 touchdowns and 9 interceptions on 67.9% passing while Reggie Gallaspy Jr. has rushed for 1,014 yards and 18 touchdowns this season. Kelvin Harmon leads NC State with 1,186 receiving yards and 7 touchdowns on 81 catches this season, while Jakobi Meyers has 89 grabs for 1,028 yards and 4 touchdowns. As a team, NC State is averaging 471.5 yards of total offense and 35.6 points per game this season

The Texas A&M Aggies come into this game after finishing the year at 8-4, including 5-3 in SEC play and also finishing the year with 3 straight victories. Kellen Mond has thrown for 2,967 yards, 23 touchdowns and 8 interceptions on 57.6% passing while Trayveon Williams has rushed for 1,524 yards and 15 touchdowns this season. Jace Sternberger leads Texas A&M with 47 catches for 804 yards and 10 touchdowns while Quartney Davis has 43 grabs for 546 yards and 7 scores this season. As a team, Texas A&M is averaging 465.8 yards of total offense and 34.7 points per game this season. The Aggies are also extremely tough against the run, giving up just 92 rushing yards per game this season, good for 2nd in the country this year.

Both of these teams are tough against the run, so if both sides get cancelled out, the ball will be flying from start to finish and if that’s the case, I have to give NC State an edge with Finley being the better pivot of the two in my opinion with the more dangerous receiving duo. However, Texas A&M is no slouch and I expect them to go punch-for-punch with the Wolfpack for the most part, so I’ll side with the over in a game that both teams could end up hitting 30+ points.