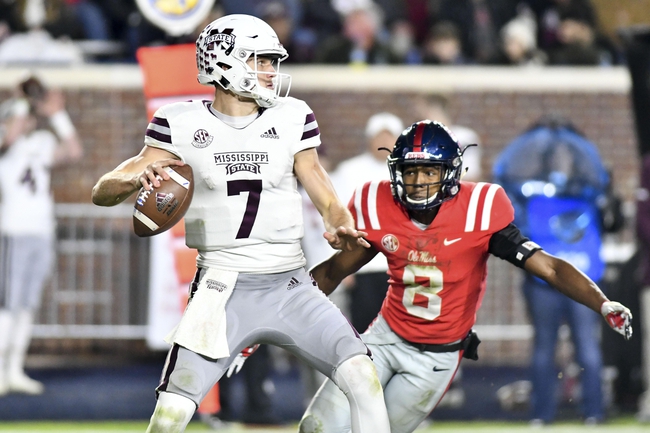 The Mississippi State Bulldogs and the Iowa Hawkeyes meet in the Outback Bowl in college football action from Raymond James Stadium from Tampa, Florida on New Year’s Day.

The Mississippi State Bulldogs come into this game with an 8-4 record, including 4-4 in SEC play to finish in 4th in the SEC West division. Nick Fitzgerald leads the Bulldogs with 1,615 yards passing, 15 touchdowns and 7 interceptions while completing 52.6% of his passes. Fitzgerald also leads the Bulldogs on the ground with 1,018 yards and 12 touchdowns rushing while Kylin Hill has 691 rushing yards and Aeris Williams has 502 rushing yards this season. Stephen Guidry led Mississippi State with 389 receiving yards with 3 touchdowns while Osirus Mitchell had 24 receptions for 385 yards and 4 TDs this season. As a team, Mississippi State is averaging 402 yards of total offense and 29.1 points per game. The Bulldogs are also one of the nation’s top defensive units, giving up the fewest yards of total offense (268.4 YPG) and the fewest points per game this season (12 PPG) this season while also allowing just 164.2 yards through the air and 104.2 rushing yards this year, both top-10 in FBS.

The Iowa Hawkeyes come into this game with a similar 8-4 mark, including a 5-4 mark in Big Ten conference play, finishing in a 3-way tie for 2nd place in the Big Ten West division, winning the spot based on a tiebreaker. Nate Stanley has thrown for 2,638 yards, 23 touchdowns and 9 interceptions on 58.5% passing while Mekhi Sargeant leads the Hawkeyes with 748 rushing yards and 9 touchdowns and Toren Young has 630 rushing yards and 5 touchdowns this season. T.J. Hockenson leads Iowa with 46 catches for 717 yards along with 6 touchdowns while Noah Fant has 39 grabs for 518 yards and a team-high 7 touchdowns. As a team, Iowa is averaging 389.7 yards of total offense and 31.5 points per game this season. The Hawkeyes are also stout defensively, allowing the 7th-fewest total offense against this season, allowing 289.6 YPG and the 4th-fewest rushing yards per game, giving up just 102.8 YPG this season.

Both of these teams play hard-nosed defense, so it’s hard to pick a side in this one. Mississippi State has Fitzgerald who is the epitome of a dual-threat QB, while Iowa has Stanley who can shred defenses with his arm. Mississippi State has the lowest scoring defense in the country, and that was against some tough competition in the SEC, including holding Alabama to their season-low 24 points while Iowa held opponents to 20 points or less 7 times this season. With that said, this has the feel of a defensive battle to me, so rather than try to pick a side, I’ll side with the under as I can see this being a game where neither side breaks 20 points.