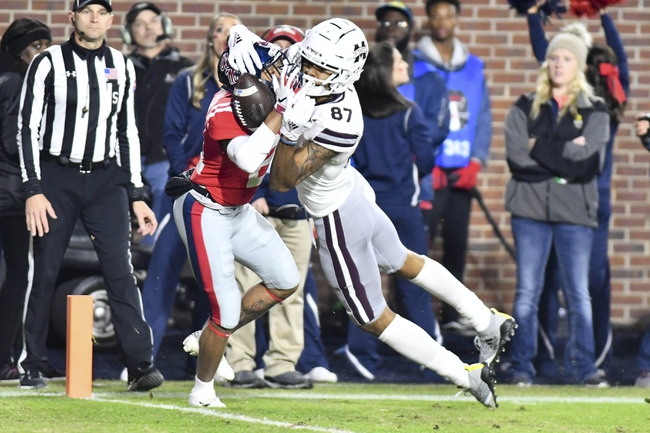 The Mississippi State Bulldogs take the field against the Iowa Hawkeyes in the Outback Bowl.

The Mississippi State Bulldogs haven’t lit up the scoreboard but haven’t had too with their defense controlling the opposition. Mississippi State was a middle of the row offensive team with 402 yards producing 29 points with the #21 rushing attack  averaging 226 yards.

The Bulldogs calling card was their third ranked defense that allowed 268 yards and 12 points and had top ten defensive numbers against the run and pass.

The Mississippi State offense went through dual threat quarterback Nick Fitzgerald who completed 52.6% of his passes for 1,615 yards with 15 touchdowns and seven interceptions. Stephen Guidry and Osirus Mitchell paced MSU with 42 receptions for 774 yards in a receiver by committee passing game.

Fitzgerald was the Bulldogs top runner with 1,018 yards on 201 carries and 12 touchdowns with Kylin Hill and Aeris Williams picking up 1,193 yards on 184 totes.

The Iowa Hawkeyes didn’t make a whole lot of noise with a 5-4 record which were the only losses in an 8-4 campaign. Iowa was average offensively at 390 yards but their 31.5 point says the team scored at every chance. The Hawkeyes excelled defensively with 291 yards and 17 points allowed with the opposition managing just 104 yards on the ground.

TJ Hockenson was the Hawkeyes top receiving option with 717 yards on 46 catches followed by Noah Fant with 39  receptions for 518 yards and a combined 13 TD’s. Iowa was not explosive on the ground with Mekhi Sargent and Toren Young combining for 1,378 on 285 totes and around 4.8 yards per carry.

Iowa looks dangerous because of their defense. The same can be said for Mississippi State who are just nasty defensively against SEC competition which has me looking their way…