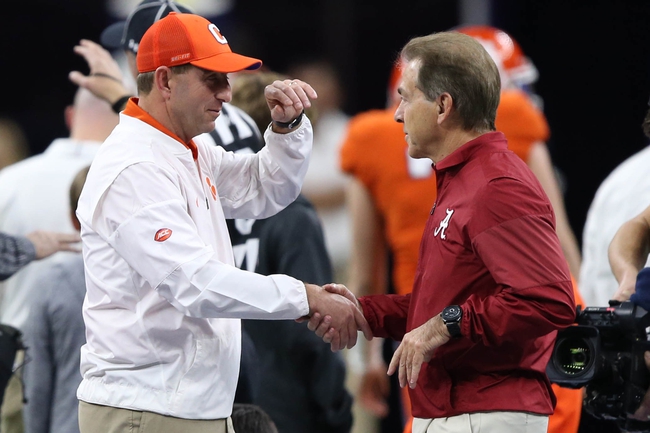 The Clemson Tigers are coming off a beatdown win over the Notre Dame Fighting Irish and have a chance at their third national title in school history. The Clemson Tigers have won their last seven non-home games. Trevor Lawrence is completing 65.3 percent of his passes for 2,933 yards, 27 touchdowns and four interceptions. Lawrence has two or more touchdown passes in six of his last eight games. Tee Higgins and Justyn Ross have combined for 1,702 receiving yards and 19 touchdowns while Amari Rodgers has 52 receptions. The Clemson Tigers ground game is averaging 257.5 yards per contest, and Travis Etienne leads the way with 1,573 yards and 22 touchdowns. Defensively, Clemson is allowing 12.9 points and 280.7 yards per game. Isaiah Simmons leads the Clemson Tigers with 75 tackles, Clelin Ferrell has 10.5 sacks and A.J. Terrell has two interceptions.

The Clemson Tigers have now won nine straight games by double digits and their last five victories have come by an average of 25.8 points. The Alabama Crimson Tide haven't lost a game since the movie Coco was released and have won their last six games by an average of 22.5 points. The Clemson Tigers have covered their last four games as an underdog of at least six points, but only two of those games have come since 2014. The Alabama Crimson Tide have covered five of their last seven games as a favorite of at least six points. These teams obviously know each other very well considering they meet each year in the national title game and neither side has shown much weakness up to this point this season. Both Clemson and Alabama are both extremely well coached, two of the better defensive sides in the country and both are led offensively by brilliant young quarterbacks. Picking a side with any confidence is pretty much splitting hairs and Alabama is probably simply getting this line based on reputation. For me this game could go either way, so I'm going to take my free touchdown with the Clemson Tigers, a game they're more than capable of winning outright.

See you guys next season.