What School Has Won The Most College Football National Championships? 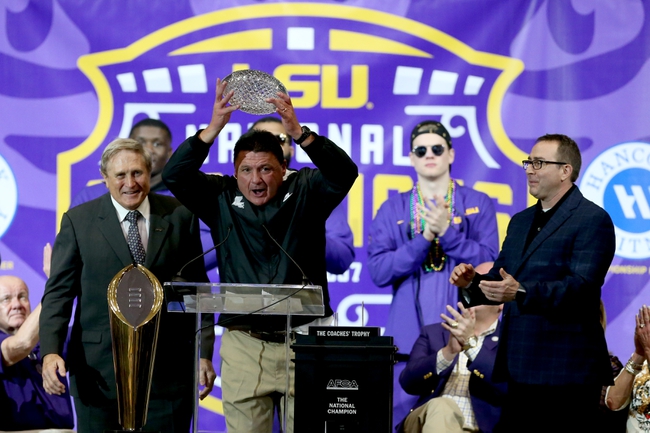 The Most national Championships in College Football By School

12 Championships - Alabama - Alabama has gotten it done in every decade since the 1960’s except for the 1980’s. Regardless of the coaching staffs, the players, or what is considered to be the trends of the current day, the Alabama crimson Tide have seemed to always find a way to be at the top of the heap at the end of the season.

8 Championships - Notre Dame - Because of the time frame reflected, some of the Notre Dame Fighting Irish’s great teams are excluded like those from the 1920’s. While Notre Dame is still s standard in College Football, they last won a championship in 1988.

7 Championships - Oklahoma - The Oklahoma Sooners seem to always be in the mix when it comes to the College football National Championship race but it has been over 20 years since the Sooners last won a title.

7 Championships - USC - Four of USC’s seven championships were split polls where the coaches and media didn’t agree at the end of the season. Tis number also includes the USC Trojans 2004 title which they later had to vacate.

5 Championships - Miami- Miami exploded onto the college football world in 1983 beating Nebraska in the championship as an 18 point underdog and went on to win 3 more titles over an 8 year span. Miami won 4 titles and lost in 5 national title games over an 11 year period in what the Hurricanes refer to as the Decade of Dominance.

4 Championships - LSU - LSU has had some great teams over the years but only 4 have gone on to win the hardware at the end of the season. In 2019 LSU went unbeaten and defeated Clemson to win their first Championship in the Playoff Era.

4 Championships -Texas - The Texas Longhorns went 35 years between championships but their most recent in 2005 was one to remember as they knocked off the defending champion USC Trojans in what many consider to be the best championship game ever.

4 Championships- Minnesota - The Minnesota Glen Gophers were dominant at the start of the poll era winning three of their championships before 1942. While Minnesota has had some nice years since, their last CFB Championship was in 1960.

The pick in this article is the opinion of the writer, not a Sports Chat Place site consensus.
Previous Pick
LSU vs. Clemson - 1/13/20 College Football Pick, Odds & Prediction
Next Pick
Who Are The Winningest College Football Head Coaches of All Time?