Which College Football Player had the Most Rushing Touchdowns for their Career? 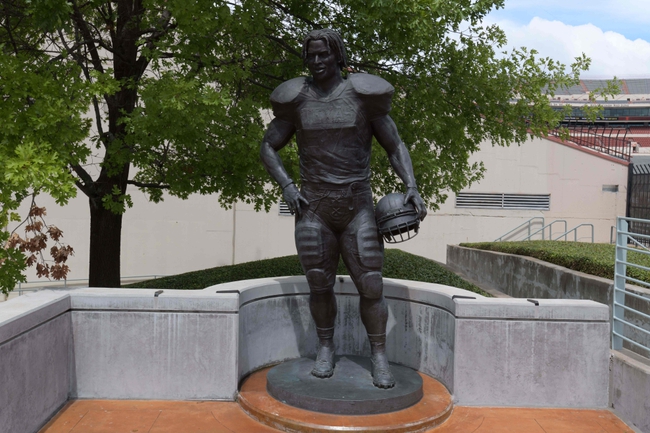 A Look at the Top Ten Players for Career Rushing Touchdowns.

There have been a lot of great players that came through the college ranks and have made money at the professional level.  Which ten players had the most rushing touchdowns in their career in college? Let us take a look and see if some of these players were on the tip of your tongue. Get winning College Football picks and College Football predictions for every game all season long at Sports Chat Place.

1. Keenan Reynolds is atop the all time list having had an outstanding career with Navy.  The dual threat quarterback did more running than passing, but was able to collect 88 touchdowns on the ground, during the years of 2012-2015. Reynolds saw his best year as a sophomore, when the quarterback rushed for 31 scores.  The quarterback finished with 4,559 yards on the ground during his 4 years at Navy. Reynolds was drafted in the 6th round by the Baltimore Ravens during the 2016 draft.

2. Monte Ball is locked in the number 2 spot on the list, having had a great career with Wisconsin.  The Badgers running back totaled 77 touchdowns on the ground during his 4 year career between 2009-2012.  Ball recorded 5,140 yards on the ground on 924 rushing attempts. Ball saw his best year as a junior, when he rushed for 1,923 yards and 33 scores.  The Wisconsin running back made heads turn, as the running back was drafted in the 2nd round by Denver in the 2013 draft.

3. Number 3 on the list was the workhorse out of Miami (OH), Travis Prentice.  Prentice collected 73 touchdowns for the Redhawks between 1996-1999. Prentice found the end zone on the ground the most during his sophomore year, crossing the goal line 25 times.  Prentice rushed for 5,596 yards during his 4 year career at Miami (OH). The running back was drafted in the 3rd round by the Cleveland Browns in the 2000 draft.

4. Kenneth Dixon slides in at number 4 on this list.  The Louisiana Tech product had a dynamic career from 2012-2015 for the Bulldogs.  Dixon registered 72 touchdowns on the ground, while rushing for 4,483 yards in his Bulldogs career.  The 4th round pick by the Baltimore Ravens in the 2016 draft saw his best year in college as a junior.  However, Dixon broke onto the scene as a Freshman rushing for 27 scores.

6. Ron Dayne makes the list at number 6, which is now the 2nd running back out of Wisconsin in the top 6.  Dayne recorded 71 touchdowns on the ground. The Badger running back saw his best year as a freshman. Dayne found the end zone 21 times as a freshman, while totaling 2,109 yards rushing.  The four year starter collected 7,125 yards on the ground during his Wisconsin career from 1996-1999.  Dayne was drafted 11th overall by the New York Giants in the 200 draft.

7. Anthony Thompson totaled 67 rushing touchdowns during his 4 year career from 1986-1989 at Indiana.  The Indiana running back saw his best year as a senior. Thompson rushed for 1,793 yards and 24 touchdowns during the 1989 season.  Thompson collected 5,299 yards on the ground for his career. Thompson was drafted in the 2nd round by the Phoenix Cardinals in the 1990 draft.

9. Cedric Benson is now the 2nd Texas running back inside the top ten, coming in at number 9.  Benson registered 64 touchdowns during his 4 year career from 2001-2004. Benson found the end zone the most his junior year, totaling 21 scores on the ground.  However, his best year overall was his senior year, where the running back rushed for 1,834 yards. Benson collected 5,540 yards on the ground in his career. Cedric Benson was drafted 4th overall during the 2005 draft by the Chicago Bears.

10. Rounding out the top 10 is San Diego State legend Donnel Pumphrey.  Pumphrey notched 62 rushing touchdowns during his career. The San Diego State running back played his career with the Aztecs from 2013-2016.  Pumphrey rushed for 6,405 yards in his Aztec career, with his best season coming during his senior year. During his senior year, the running back rushed for 2,133 yards and 27 scores. Pumphrey was drafted in the 4th round by the Philadelphia Eagles during the 2017 draft.

The pick in this article is the opinion of the writer, not a Sports Chat Place site consensus.
Previous Pick
What College Football Team Has The Most Wins All Time?
Next Pick
Which College Football Player had the Most Rushing Touchdowns During a Season?