Who Has the Most Rushing Yards in College Football History? 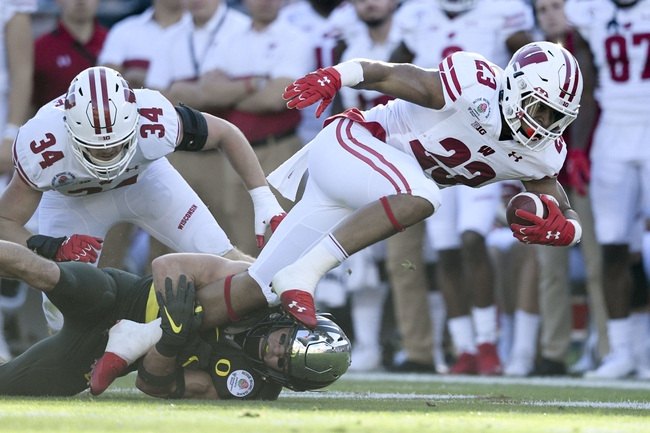 It’s impossible to understate the importance of a good rushing game in college football. Whoever controls the clock controls the game, and teams with great running backs can help keep the other offense off the field on the way to an important win. Get Free College Football Picks and College Football Predictions for every game all season long with Sports Chat Place.

These are the NCAA Division I FBS players with the most rush yards in history.

1. Ron Dayne, Wisconsin, 7,125 (1996-99) - With nicknames like the “Great Dayne” and “Dayne Train,” you know you’re in store for a great running back, and that’s Dayne. He was over 1,800 yards during both his freshman and senior seasons, and broke the record (which includes bowl games) in 1999. Dayne is a member of the College Football Hall of Fame and went on to a seven-year NFL career with the Giants, Broncos and Texans.

2. Ricky Williams, Texas, 6,592 (1995-98) - Few college football personalities are as interesting as Williams, and he’s a revered figure when it comes to Texas. The College Football Hall-of-Famer managed a ton of awards in school, including AP Player of the Year, a Big 12 championship and a Heisman Trophy. Williams went on to play professionally from 1999-2012, including a brief stint in the CFL.

3. Tony Dorsett, Pittsburgh, 6,526 (1973-76) - Before Dorsett was running people over as a Dallas Cowboy, he was racking up rush yards at Pittsburgh. He got started immediately as a freshman, winning All-American honors and finishing second in the country in rushing with 1,586 yards in 11 games. Dorsett is in the Hall of Fame at both the college and pro levels, made four Pro Bowls and won a Super Bowl.

4. Donnel Pumphrey, San Diego State, 6,405 (2013-16) - Pumphrey played in all 13 games as a freshman at San Diego State, though he only got one start. He really got going as a sophomore, rushing for 1,876 yards with 20 touchdowns. Injuries plagued Pumphrey as an NFL rookie so he never really caught on, but he did get a Super Bowl ring with the Eagles.

5. Charles White, USC, 6,245 (1976-79) - White is a pretty accomplished football player, and he’s got a Hall-of-Fame caliber resume to prove it. He was a two-time Pac-10 Player of the Year, a national champion in 1978 and won the Heisman Trophy in 1979. White spent some time in the NFL before moving into a coaching role at USC.

6. Jonathan Taylor, Wisconsin, 6,174 (2017-19) - At 5 ft 11 in and 214 pounds, Taylor is a shifty and powerful presence on the football field. His list of college accomplishments is pretty stout; he won the Doak Walker Award twice, the Big Ten Running Back of the Year twice, and set the all-time season rushing record for freshmen with 1,977. Taylor chose to skip his senior season and declared for the 2020 NFL Draft.

8. Royce Freeman, Oregon, 5,621 (2014-17) - Freeman was the highest-rated recruit in the country coming out of high school, and Oregon won out as his destination of choice. During his college career, he managed First-team All-Pac-12 and was the Pac-12 Offensive Freshman of the year. Freeman was selected 71st overall in the third round of the 2018 NFL Draft by the Broncos.

9. Travis Prentice, Miami-OH, 5,569 (1996-99) - Prentice was redshirted in his freshman year, then began to show his skills with a solid sophomore campaign despite never starting. He was MAC MVP and MAC Offensive Player of the year in 1998. Prentice spent a few years in the NFL with the Browns, Vikings and Cardinals.

10. Cedric Benson, Texas, 5,540 (2001-04) - Benson is a really well-rounded athlete, and he’s a fitting name to finish off our college football career rushing yards list. He was drafted in the 12th round of the 2001 MLB Draft but never played baseball professionally. That’s good news for Texas fans, because Benson would go on to win Big 12 Offensive Freshman of the Year and was selected to two First-team All-Big 12 squads.

The pick in this article is the opinion of the writer, not a Sports Chat Place site consensus.
Previous Pick
Which College Football Player had the Most Touchdowns From Scrimmage for their Career?
Next Pick
Navy vs. Notre Dame - 8/29/20 Early Look College Football GOY Pick, Odds, and Prediction