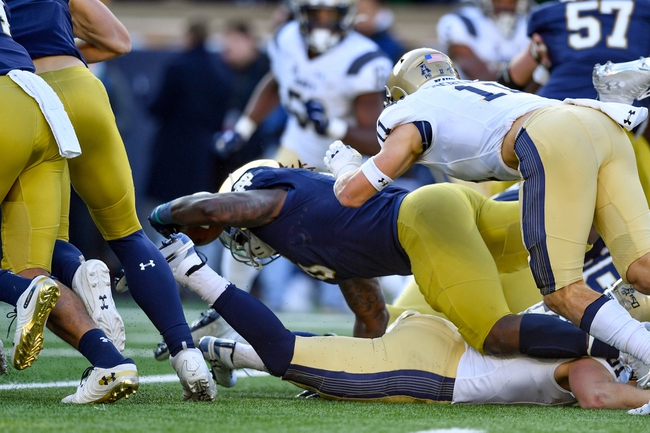 The Notre Dame Fighting Irish have won double-digit games each of the last three years and hope they can build on that success. The Notre Dame Fighting Irish looks to be solid offensively, as the offensive line is loaded with guys who have starting experience, quarterback Ian Brook just threw for 3,000 yards and 34 touchdowns and Braden Lenzy is a big play receiver who should thrive in an expanded role. Defensively, Notre Dame returns its top-two tacklers in Jeremiah Owusu-Koramoah and Drew White, while productive defensive backs TaRiq Bracy and Kyle Hamilton form one of the better 1-2 secondary punches in the country. The Irish have a lot of pieces in place to push for double-digit victories once again and should have high expectations. However, it's about getting over that hump and becoming national title threats that Notre Dame needs to focus on heading into the 2020 season. Check back all season long for free college football picks and college football predictions at Sports Chat Place.

The Navy Midshipmen are coming off an 11-win season, arguably their best season in school history and just the fifth time they've won double-digit games. The Navy Midshipmen will have to replace Malcom Perry at quarterback, and that will likely be Perry Olsen, who threw eight passes last season as a freshman and had 34 rush attempts. Navy still has a three-headed monster at running back in Jamale Carothers, Nelson Smith and CJ Williams to shoulder the load offensively, and that makes the transition at quarterback much easier. Defensively, Navy returns its top-12 tacklers from last season, including a star linebacker tandem in Jacob Springer and Diego Fagot. Defensive back Michael McMorris had nine pass deflections and Kevin Brennan had a pair of interceptions. Navy should be fine as long as the QB position gets figured out and this team could make a push for an AAC crown.

Notre Dame beat Navy by 32 points when these teams met last year in South Bend and the last two meetings against the Midshipmen have been double-digit blowouts. The trip to Dublin can be tricky and you're never sure how guys are going to respond from such a long trip. I also don't love laying double-digit chalk early in the season when teams are knocking off the rust and figuring out how to replace lost production. With all that said, Notre Dame has a lot of familiar faces from last season, while Navy has to replace a quarterback, which is tough in a triple-option system.

Also, Notre Dame plays this triple-option offense every season and has had all offseason to prepare for it again with this being the season opener. You want to play Navy early so you have months to prepare, rather than just one week in the middle of the season. Give me the Irish in a comfortable beatdown.

The pick in this article is the opinion of the writer, not a Sports Chat Place site consensus.
Previous Pick
Who Has the Most Rushing Yards in College Football History?
Next Pick
Which College Football Quarterback had the Most Passing Completions for their Career?