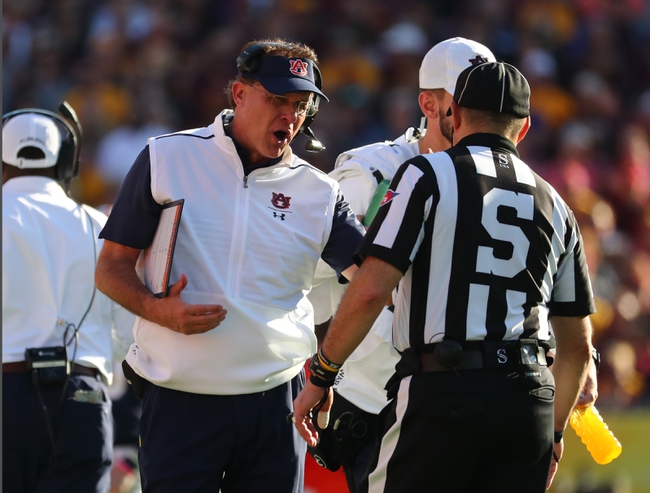 The Auburn Tigers have a shot at flirting with double-digit wins in a tough SEC during the 2020 college football season.

All things considered, Auburn did pretty well last season in a powerhouse conference, finishing third in the West Division behind LSU and Alabama, and ranked No. 14 in the country. The Tigers went 9-4 overall and 5-3 in the SEC. Auburn’s 2019 season ended on a sour note however, with a loss to Minnesota 31-24 in the Outback Bowl. Check back all season long for free college football picks and college football predictions at Sports Chat Place.

Let’s break down Auburn’s chances at hitting nine wins once again in 2020.

With nine invitations to the NFL Combine, Auburn experienced an unusually high level of departed talent between 2019 and 2020. The big blow here is to the defense; DT Derrick Brown, DE Marlon Davidson and CB Noah Igbinoghene are all professionals now, and a handful of other impact linemen and secondary guys will be absent from the Tigers roster as well. That’s going to be a huge amount of talent to make up for, so if you’re pessimistic then you may already be considering this a lost season.

The good news here is that Auburn still has a solid returning coaching staff that will make the most of the new faces on the roster. Head coach Gus Malzahn is going into his eighth season and DC Kevin Steele will be on his fifth. Offensive coordinator Chad Morris enters his first season with the Tigers, following stints with Tulsa, Clemson, SMU and Arkansas. Morris will be serving as quarterbacks coach as well, and he could do some interesting things with the Auburn offense this season. They're going to need some flash on that side of the ball following a pretty pedestrian performance as a unit in the Outback Bowl.

Schedule-wise, it doesn’t look too bad for the Tigers either. Auburn has seven home games, four road games and one neutral-site matchup. There are plenty of winnable games in the early part of the season before the SEC stuff kicks in and things get serious, so that will allow some time for the Auburn players to settle into their roles. The Tigers’ record should be looking pretty good around the middle of November. Looking at the schedule, if all goes well there’s a clear path to hit nine wins there.

Pick: With all of that said, I have to stick with the under. Considering all the talent Auburn lost in the offseason it’s going to take a few games for the team to find its groove again, and even though the schedule is backloaded well enough for some win opportunities at the beginning of the season I don’t think the Tigers will ultimately hit nine unless the season plays out perfectly.

The pick in this article is the opinion of the writer, not a Sports Chat Place site consensus.
Previous Pick
JT Daniels Transfer: 5 Schools To Land USC Quarterback
Next Pick
Arizona Wildcats 2020 Win Total - College Football Pick, Odds and Prediction