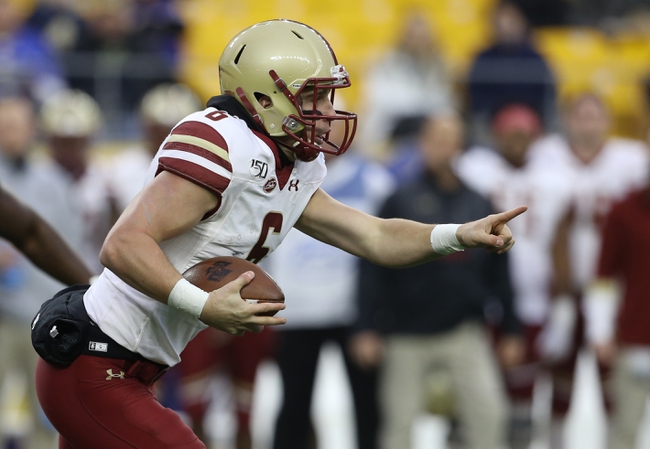 Boston College had a pretty mediocre football season in 2019, finishing at 6-7 overall and 4-4 in the ACC. That result was still good enough for an invite to the Birmingham Bowl, where the Eagles were blown out 36-6 versus Cincinnati. Boston College will be looking to get back to a bowl game in 2020 and come away with a victory this time. Get Free College Football Picks and College Football Predictions for every game all season long at Sports Chat Place.

Let’s take a closer look at Boston College’s status heading into the 2020 season and break down their chances at hitting six wins again.

One drawback to playing in the ACC is that the conference is filled with competitive teams—not necessarily great teams, but decent. That means not too many squads will emerge with great conference records. Six different schools were .500 in the ACC last season, and only four had winning records in conference play (two of those by just one game at 5-3). In any case, it’s going to be another tough slog for Boston College this season. If the Eagles want to get back to a bowl game, they’ll have to get wins anywhere they can.

The tone will begin with new head coach Jeff Hafley, who brings with him a ton of high-level coaching experience. Hafley is a defense-minded coach, and if he can fit the pieces together we’ll see a nice uptick in production on that side of the ball. He’ll also have to figure out the quarterback situation, as Boston College has a huge question mark in that area right now. Also the AJ Dillon void is going to be sizable. Dillon rushed for 4,382 yards and 38 touchdowns during his career as an Eagle.

Looking at the schedule, Boston College really has to get off to a good start if they’re going to hit the six-win mark. If the Eagles can get past Syracuse in Week 1, they also have three winnable games over the next few weeks 3-1 in that stretch would be great, and 4-0 isn’t out of the question.

Beyond that, Boston College will have to pull out some surprises in conference play, as they probably won’t beat Florida State, Virginia Tech or Clemson. If the Eagles can take care of teams like Wake Forest and NC State, they’ll really up their national profile and confidence level.

Pick: I’m going with the over, but I’m not thrilled about it. The number on this one seems pretty spot-on, but I think Boston College has a higher chance of winning six games than they do winning just four. With the new coaching staff and question marks at the skill positions there are simply way too many variable however, so I’m probably staying away. Should be a very interesting season for Boston College, though.