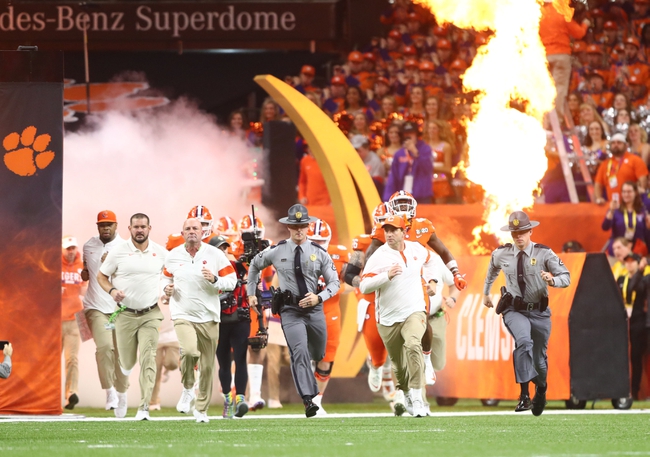 College football fans are expecting big things from Clemson in the 2020 season. The Tigers are the odds-on favorites in the country for both win total and title odds, so anything less than a national championship would be considered a disappointment for this talented program. Realistically, there are only a handful of other teams who could compete with Clemson on the football field this year. Get Free College Football Picks and College Football Predictions for every game all season long at Sports Chat Place.

Let’s take a closer look at Clemson’s status heading into the 2020 season and break down their chances at hitting 12 wins.

As with pretty much every season, Clemson suffered some major losses to the 2020 NFL Draft. Versatile defender Isaiah Simmons went No. 8 overall, and not having his 818 snaps, 107 tackles, eight sacks and 16 tackles for loss will certainly be a major gap. After an impressive run with the Tigers, Simmons should do well at the NFL level.

Further accenting the defensive hole is AJ Terrell, who became the 14th Clemson defensive back to be drafted since 2010. He went No. 16 overall to Atlanta. There were more key Tigers guys drafted in the earlier rounds, like WR Tee Higgins, safety Tanner Muse and guard John Simpson. Their losses will all be pretty significant, and Clemson will need to find creative ways to replace that production this season.

The good news is that Clemson’s leadership is intact once again, as head coach Dabo Swinney enters his 12th full year with the team. Offensive coordinator Tony L. Elliot (sixth season) and defensive coordinator Brent Venables (ninth season) return as well, and as a core group that coaching staff should be able to maximize the talent on the field as usual.

Looking at Clemson’s schedule for the 2020 season, it doesn’t look all that daunting for a powerhouse team such as this. The Tigers do have a couple of potentially daunting road games, however. Going into Florida State won’t be easy, and in Week 10 Clemson has a huge nationally-televised matchup on the road versus Notre Dame. The matchup with the Irish will probably be the toughest game on the regular-season schedule, but by then we should have a better idea of Clemson’s team identity for the 2020 campaign and a clear view of the odds.

Pick: It’s a pretty steep number, but I have to stick with the over here. Clemson will once again be fielding an immensely talented squad under competent leadership, and by all indications they should be one of the top teams in the country. I think Clemson runs the table again this year and we’ll likely be seeing them in the national championship.