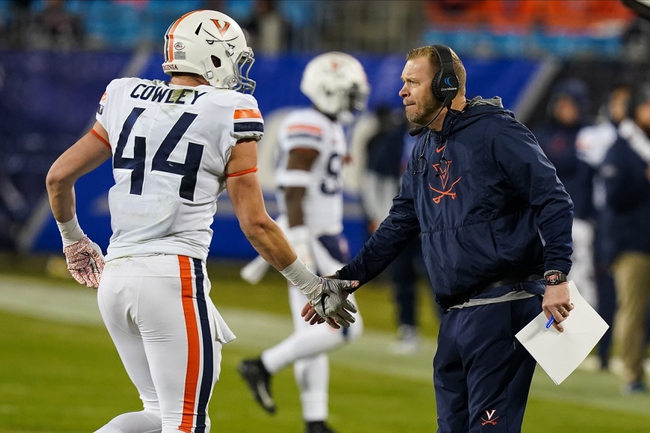 All things considered, Virginia had a pretty solid football season in 2019, though things didn’t end as the team hoped. The Cavaliers went 9-5 overall last year, but fell to Clemson in the ACC Championship Game 62-17 and to Florida in the Orange Bowl 36-28. Virginia will certainly be looking to get back to a bowl game in 2020 and taking home a win this time. Get Free College Football Picks and College Football Predictions for every game all season long at Sports Chat Place.

Let’s take a closer look at Virginia’s current status and break down their chances at hitting seven wins this season.

The Cavaliers took the Coastal Division by the proverbial skin of their teeth in 2019, edging out Virginia Tech by one game with a 6-2 record in ACC play. That conference record is even more impressive when you consider that only four teams were better than .500, and just two (Virginia at 6-2 and Clemson at 8-0) were better than 5-3. In any case, we’re likely to see more of that intense competition in the ACC this season, as it’s once again chock full of decent-to-good teams.

Virginia will need to plug some holes from departed players this season; Joe Reed and Bryce Hall were selected in the fifth round of the NFL Draft, and Bryce Perkins signed with the Rams as an undrafted free agent. With Perkins gone, head coach Bronco Mendenhall will have to replace one of the best QBs in the history of the program, so it’s an unenviable task. Sophomore Brennan Armstrong is an option, but we’ll see where the team eventually looks as the season gets closer.

It may be difficult for the Cavaliers to get any momentum out of the gate. There are two tough matchups in the first four games in Georgia and Clemson (the latter being on the road). A 2-2 start is pretty likely here, and though that’s not ideal it’s survivable if Virginia can rattle off wins versus North Carolina, Georgia Tech and Old Dominion in the weeks afterward. Pick up another couple of victories in the Louisville, Duke and Pitt games and the Cavaliers are likely bowl-bound and maybe even ACC-Championship-bound again.

Pick: I have to stick with the under here. Though Virginia does have a clear path to seven or eight wins this season, it’s going to be difficult to find any sort of identity early in the season thanks to the turnover at key positions. The Cavaliers can be pretty up-and-down these days, and this year I think is more of a “down” campaign. Five or six wins seems like the most likely scenario for Virginia in 2020.