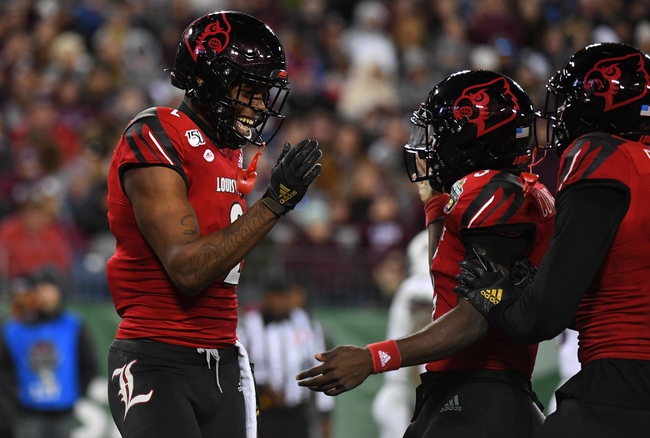 The Louisville Cardinals will spend the 2020 college football season trying to gain some ground in the ACC and make a bowl game.

Louisville is coming off a pretty good football season in 2019. The Cardinals finished the campaign at 8-5 overall and in second place (behind the mighty Clemson) in the ACC’s Atlantic Division. That effort earned Louisville a berth in the Music City Bowl, where they took out Mississippi State 38-28. In 2020, the Cardinals will be looking to replicate that success with another bowl victory and a strong conference showing. Check back all season long for free college football picks and college football predictions at Sports Chat Place.

Let’s take a closer look at Louisville’s current status and break down their chances at hitting eight wins this year.

There was a lot of above-average talent in the ACC last year, and it’s a testament to the Cardinals’ success that they had one of only four winning records in the conference. Louisville’s path to another second-place Atlantic Division finish (there’s little chance they’ll overcome Clemson, barring a miracle set of circumstances) is going to be a little tougher this season, however; there are some big hitters on the schedule and everyone will see the Cards coming. More on that in a moment.

The Cardinals retain head coach Scott Satterfield and his crew for the second year, so with all the routines and schemes in place Louisville should be able to hit the ground running. Satterfield and the gang will have to deal with a bit of turnover this season, most notably the loss of talented OT Mekhi Becton, who went No. 11 overall to the New York Jets. Optimally, Louisville should be able to patch up the defense and watch QB Micale Cunningham (2,061 yards and 22 scores in 12 games last year) take another step forward.

Louisville was picked to finish last in the Atlantic in the preseason media poll in 2019 and the team ended up making a lot of people eat their words. No one will be sleeping on the Cardinals this time however, and with talented teams like Clemson, Notre Dame, Virginia, Kentucky and Virginia Tech on the schedule nothing will be easy for Louisville.

Pick: I have to go under here. I’d be higher on Louisville if their schedule wasn’t so tough; there are three road games before the bye and a slew of tough games afterward. It may be difficult for the Cardinals to find a consistent rhythm in 2020. Louisville is talented enough to optimally go 4-2 or 5-1 prior to the bye, but at this point I only see two or three wins afterward. Eight victories (or more) is possible this season, but seven or fewer seems more likely.