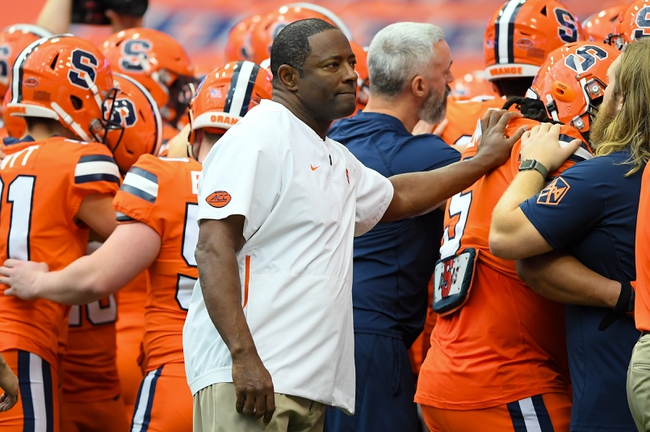 Syracuse had a difficult football season in 2019. The Orange finished at 5-7 overall and just 2-6 in a tough ACC, leaving the team in fifth place in the Atlantic Division. Syracuse will look to show some progress this season, and if all goes well they could flirt with a bowl bid. Get Free College Football Picks and College Football Predictions for every game all season long at Sports Chat Place.

Let’s take a closer look at Syracuse’s current status and break down their chances at hitting the six-win mark this season.

Anyone in a division with Clemson gets a bit of a pass for a bad showing, but Syracuse wasn’t able to do much of anything in ACC play last season. The Orange had the second-worst record in the conference, tied with Georgia Tech and ahead of only NC State in the basement. That said, there were only four teams in the ACC who had records over .500 in their conference matchups last year.

Head coach Dino Babers returns to the sideline for Syracuse this year, and he’ll attempt to right the ship and get the team back to the better results of a couple seasons ago. His crew will have to deal with some turnover as usual. Notably, defensive end Alton Robinson and punter Sterling Hofrichter were selected in the NFL Draft. DE Kendall Coleman, WR Sean Riley, WR Trishton Jackson and OL Evan Adams signed as undrafted free agents as well.

Beyond that, Syracuse has a couple of new coordinators and it will likely take a few games to see what the team’s identity will be this season. QB Tommy DeVito needs to show some improvement as well despite his 19 touchdowns and 63.2 completion percentage last year.

Looking at the schedule, there are some rough matchups on tap. Despite going on the road in three of their first four games, there are a few wins to be had in that first quartet. The home matchup versus Louisville right before the bye will be very important as well. Clemson (obviously), Florida State ant Pitt loom large as potentially dangerous matchups for the Orange.

Pick: This one’s tough, but I’m going to stick with the under. Do I see six potential wins on the schedule for the Orange? Yes, but considering the schedule starts out strong, and considering Syracuse will be adjusting to some new schemes and coaches, I don’t think things will work out optimally. Ending the season with Florida State and a road matchup against a dangerous Pitt team doesn’t bode well, either.