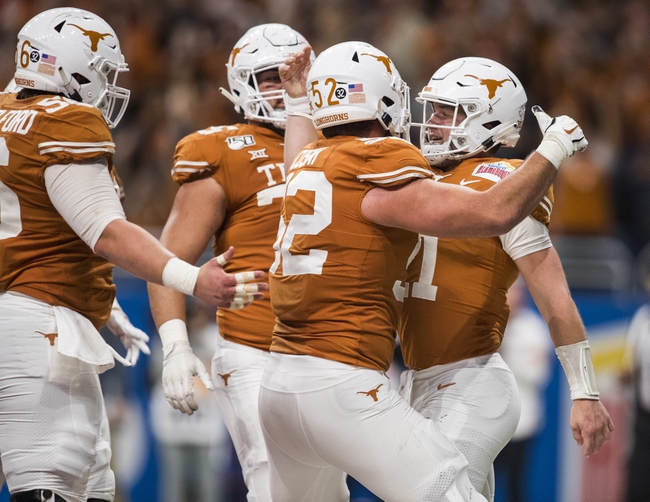 The Texas Longhorns are potentially in a good position to achieve double-digit victories in the 2020 college football season.

Texas had a pretty solid (if slightly disappointing) football season last year, finishing 8-5 overall and 5-4 in a tough Big 12 conference. The Longhorns were invited to the Alamo Bowl, where they took care of Utah 38-10. In 2020, Texas will be looking to make some noise in the Big 12, get themselves another bowl victory and maybe even win a conference championship. Check back all season long for free college football picks and college football predictions at Sports Chat Place.

Let’s take a closer look at Texas’ current status and break down their chances at hitting double-digit wins this season.

Texas’ 5-4 conference record last season looks pretty mediocre at first glance, but considering the top-level talent the Longhorns had to deal with, finishing tied for the third-best record in the Big 12 isn’t too bad. For the most part, Texas was competitive in their losses last season and if they can stay in games like that this year the victories will come.

This will be Texas head coach Tom Herman’s fourth year at the helm, and he welcomes in new offensive coordinator Mike Yurcich and new DC Chris Ash. That crew will have to deal with the usual turnover; notably safety Brandon Jones and wide receivers Devin Duvernay and Collin Johnson were selected in the NFL Draft this year. Texas does have 16 starters returning in 2020 however, including quarterback Sam Ehlinger. If a couple of young wide receivers can step up and fill the gaps in that area the Longhorns’ offense could be quite potent.

Looking at the schedule, there are a few daunting matchups. Texas is going to have to come out of the gate strong, as there’s a very tough road game at LSU in the second week. Returning from the bye week, there are two potentially difficult matchups against Kansas State and Oklahoma, and that road outing at Oklahoma State looms large in the final game.

Pick: I like the over here. Texas is returning a good crop of impact names on both sides of the ball, and assuming the new coordinators can make use of all that veteran talent the Longhorns will be doing big things in 2020. Texas has some major programs on the schedule, but they’re spread out pretty well enough that the team shouldn’t become overwhelmed. I’m pretty bullish on the Longhorns this season.