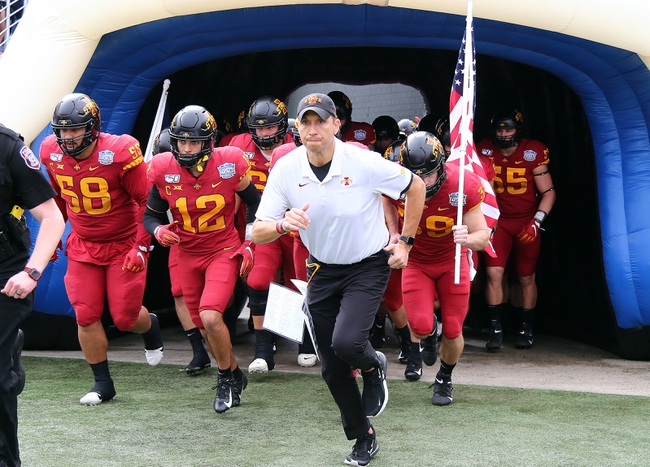 Iowa State put up a decent football season in 2019, but it ended in blowout disappointment. The Cyclones managed to go 7-6 overall with a 5-4 record in a tough Big 12, but fell big in the Camping World Bowl 33-9 at the hands of Notre Dame. Iowa State will be looking to make some headway in the conference during the 2020 season, and hopefully come away with a bowl game victory as well. Get Free College Football Picks and College Football Predictions for every game all season long at Sports Chat Place.

Let’s take a closer look at Iowa State’s current status and break down their chances at hitting the nine-win mark this year.

Iowa State looked like a team on the brink of big things in 2019. None of the team’s regular-season losses came by more than 10 points, and the Cyclones held tough with talented teams like Iowa (18-17 loss), Baylor (23-21 road loss) and Oklahoma (42-41 road loss). Had a couple more things broken Iowa State’s way last season, they could have been competing for a Big 12 championship.

This season, Iowa State gets head coach Matt Campbell back for his fifth year, as well as OC Tom Manning (second year) and DC Jon Heacock (fifth year). The coaching staff will have a few holes to fill as usual; no Cyclones player was selected in the NFL Draft this year but five signed UDFA contracts. The major point of need over last season seems to be offense; Iowa State will have to make the most of what they’ve got in order to compete with the likes of Oklahoma State, Texas, Baylor and Oklahoma.

The good news is that there are wins to be had on the schedule, and though Iowa State’s roster is probably better set up for next season, there’s no reason they can’t gain some more ground in the Big 12 and get themselves into a high-profile bowl game. Prior to the open week Iowa State has a couple of potentially troublesome road games versus Iowa, Kansas and Oklahoma State. If the Cyclones can escape that gauntlet with four or five victories, they’ll be well set-up for a nice run to close out the season.

Pick: The Cyclones are another tough Big 12 team to gauge this year (it’s going to be a highly competitive conference yet again), but I’m going with the over. Iowa State seems to be setting themselves up well for Big 12 competition over the next couple of seasons, and there are nine victories (or possibly more) available on paper here. If the Cyclones can get better results than last year in those close, high-impact conference games, Iowa State could surprise a lot of people in 2020.