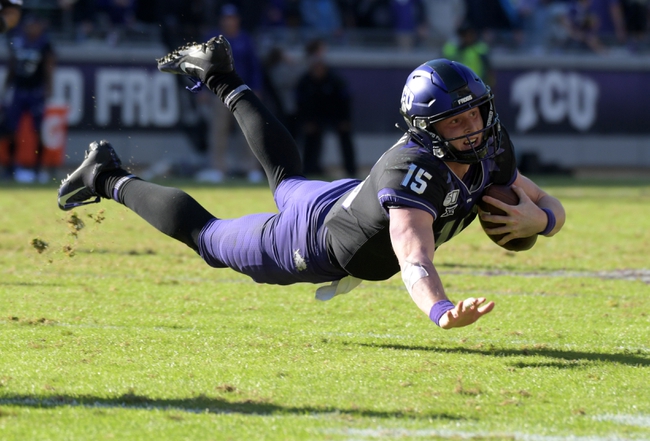 The TCU Horned Frogs should be on the cusp of bowl game eligibility in the 2020 college football season if all goes according to plan.

TCU had a pretty rough football season in 2019, finishing 5-7 overall and just 3-6 in the Big 12. That finish left the Horned Frogs three spots out of the conference basement in a year where they were projected to finish much higher. In 2020, TCU will attempt to right the ship, make some noise in the Big 12 and get back to a bowl game. Check back all season long for free college football picks and college football predictions at Sports Chat Place.

Let’s take a closer look at TCU’s current status and break down their chances at hitting seven wins this season.

TCU started out 2019 well enough, showcasing some nice scoring capabilities in a 3-1 start. The Frogs went just 2-6 the rest of the way however, beating only Texas and Texas Tech. The good news is that TCU was only blown out in one game and were otherwise competitive in their losses.

Returning to the TCU sideline in 2020 is 20-year veteran head coach Gary Patterson. He and his staff will have their work cut out for them. Young QB Max Duggan showed some promise last year and he’s set to take a step forward if a few new targets emerge to replace the departed Jalen Reagor, who led TCU on 43 receptions, 611 yards and five touchdowns last year. There will be plenty of new faces on the roster; the Frogs had another big NFL Draft haul with five former players selected. In addition to Reagor, cornerback Jeff Gladney and DT Ross Blacklock will be big voids for TCU this season.

Looking at the schedule, there are a lot of different things that could happen. The Frogs have a big game on the road against Cal right out of the gate, and also have an early bye week before hitting the road three times in a five-game span. TCU’s early rhythm is going to be key; they’ll be tested in some major matchups come October. There should be a half-dozen solid teams in the Big 12 this season, and none of those conference outings will be easy.

Pick: I’m going to go over here. I’m pretty high on TCU; so long as some of the younger players can step up and become contributors the offense should continue to develop. The Frogs also have some options on defense and if nothing else they don’t have a ton of depth issues on that side of the ball. So long as TCU plays to their capabilities—especially in those key Big 12 matchups—the Frogs have a shot at flirting with double-digit victories this season.